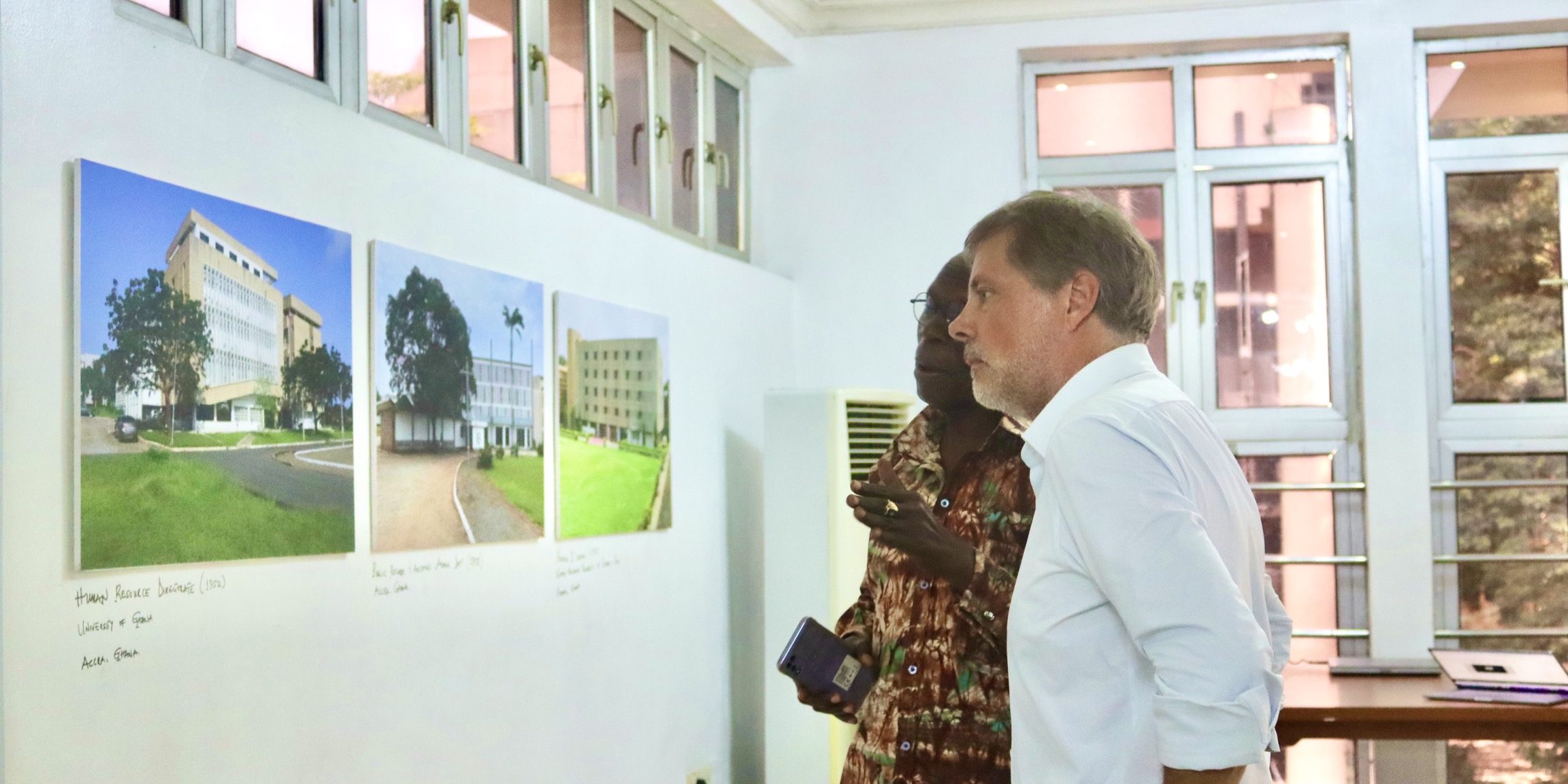 If walls could talk, what many wonders, travails and history they would unveil. United by the purpose of investigating some of these secrets, nine (9) fellows from Ghana, Nigeria and Uganda have been carefully selected to document and investigate the political and societal significance of post-war modern buildings constructed between the 1950s and 1970s in their countries.

A premiere exhibition of their findings, tagged “Shared Heritage Africa (SHA): Rediscovering Masterpieces Digital Fellowship” was hosted by the Centre for Housing and Sustainable Development (CHSD), University of Lagos (UNILAG) on Thursday, October 27, 2022 at the Institute of African and Diaspora Studies (IADS), UNILAG, Lagos, Nigeria.

The exhibition revealed some of the stories behind architectural masterpieces that have either been neglected to ruin or are still standing tall and strong. The fellows enlightened visitors of the design, style and peculiarities of the buildings chosen for display.

These buildings, which withstood the test of time and still serve functional and/or educational purposes, are termed Modernist architecture. This simply means they were designed and built using an architectural style that favours the use of glass, steel and reinforced concrete coupled with the ideology that form should follow functionalism.

Many of them were constructed at a time when air conditioners were of little need, thus the fellows are studying how they have been optimised over time to cater to present-day needs such as internet, air conditioning, lighting etc.

One of the Shared Heritage Africa (SHA) fellows and a graduate architect of the School of Architecture and Design at Central University, Ghana, Emmanuella Ama Codjoe, provided an insight into the past glory of the abandoned Meridien Hotel of Tema, Ghana, which is one of the buildings featured at the exhibition. Emmanuella’s piece titled: “Unclothed Yet Dignified”, which captured the brutalism variant of modernist architectural style, examined how this once glorious edifice became a neglected shadow of itself.

According to her, “the hotel, being the pride and glory of Tema for many years was celebrated by a Ghanaian music group called Wulomei in a song titled ‘Meridian’, which was released in 1975. The level of the grandness and significance of the hotel propelled the music group’s song to top the charts at that point in time.

Titled “Fraternal Twins”, these two buildings share similarities in their architectural design and a common historical background in their naming which has politics and social constructs deeply woven into them. He intends to further explore the politics, historical relevance and economic prosperity that produced the quote “Nigeria’s problem is not money, but how to spend it”, as well as examine the material, duration, construction and character of these two buildings that contribute to what is known as the University of Lagos Concourse.

The interesting links between these buildings and sociopolitical factors brings to mind the quote that portrays architecture as frozen music by a German poet and scientist, Johann Wolfgang von Goethe.

“Architecture should speak of its time and place, but yearn for timelessness.” – Frank Gehry. This saying highlights buildings that have either been optimised to cater to present-day needs or remain in their original form while servicing the needs of today.

The study by an architect with INSPO7 Studios and research & teaching assistant with the School of Architecture and Design (SADe), Central University, Ghana, Jonathan Kplorla Agbeh, shows that the Senior Staff Clubhouse at Kwame Nkrumah University of Science and Technology, Kumasi, Ghana, still caters to present day climate needs voiding the necessity for installation of air conditioners.

Jonathan explained that the expert use of pilotis in the grid of the building’s design allows for effective passive ventilation. He named his research panel “Tropical Cube”, as the building in his study can be observed as four different cubes of ‘lego’ blocks connected to one another both vertically and horizontally, accommodating overlaps in two storeys.

The case, however, is different with the study of the Senate House at the University of Lagos done by an Associate Director at James Cubitt Architect and UNILAG alumnus, Tubi Otitooluwa. His study of the response of users of the building revealed the adaptation in social interactions, execution of tasks, and use of technology in public and private spaces within the building.

Constructed at a time when internet access was not of prime importance, the Senate House, UNILAG has since been optimised to accommodate not only the different types of internet connections time has witnessed but has also been adapted to the use of air conditioning systems since the indoor temperature in the tropics have increased significantly over time, amongst other factors. This inspired the title Tubi dubbed it as a “Mutant Building”.

What is society without religion? The study of the architectural design of Our Lady of Annunciation (OLA) Cathedral, Tamale, Ghana, done by a Ghanaian architect, engineer and entrepreneur, Abdul-Rashid Alhassan, took guests at the exhibition through how the Catholic Church solidly established its footprint in the new cosmopolis of Tamale, Northern part of Ghana after the country newly gained independence from the British rule. He termed his work “Modernist Hallelujah”.

Other pieces on display include Main and North Hall at Kyambogo University, Kampala, Uganda by Christine Matua, a graduate architect and educator at Uganda; Barclays Library at Kyambogo University, Kampala, Uganda by Timothy Latim, an architect and photographer at Uganda; an abstract on “Modernism as a Nation-Building Exercise” by Immaculata Abba, a researcher, writer, and photographer at Nigeria; Ecole Belgé, Kigali, Rwanda and the adaptive reuse of Norrsken, Kigali, Rwanda by Justicia Caesaria Kiconco, an architectural researcher at MASS Design Group in Kigali, Rwanda; Faculty of Science building, University of Lagos by Tubi Otitooluwa etc.

The exhibition was well attended by members of the University of Lagos community as well as scholars across Nigeria, Ghana, Tanzania, South-Africa, etc. studying at the Goethe-Institut, Lagos. Also present at the exhibition along with some of the fellows were some of the coordinators and mentors of the project including the Co-Director, CHSD, UNILAG, Nigeria, Professor Taibat Lawanson; Editor-in-chief, Architectuul, Christian Burkhard and Photographer, bau1haus, Jean Molitor.

The Shared Heritage Africa Project is a research, writing and photography project to re-discover modern buildings from the period of independence from British colonial rule (1950s-1970s) in Ghana, Nigeria and Uganda, with a keen focus on buildings with educational and socio-political significance.

The fellowship is co-ordinated by DOCOMOMO, Germany in partnership with Centre For Housing and Sustainable Development, University of Lagos and the University of Liverpool, funded by the German Federal Office for Foreign Affairs:  Bundesamt für Auswärtige Angelegenheiten (BfAA) from 2021-2023.

DOCOMOMO International is a non-profit organization dedicated to documentation and conservation of buildings, sites and neighbourhoods of the Modern Movement. It was initiated in 1988 by Hubert-Jan Henket, architect and professor, as well as Wessel de Jonge, architect and research fellow at the School of Architecture, Technical University in Eindhoven, the Netherlands.

The Centre for Housing and Sustainable Development (CHSD) at the University of Lagos was established to equip policy makers, law makers, housing providers and researchers with the appropriate tools for profitable, affordable housing provision. It pioneers new ways of housing provision and management, reviews current and emerging practice in the housing industry and supports those who have the responsibility for proffering policies to manage the housing situation in Nigeria and Africa.