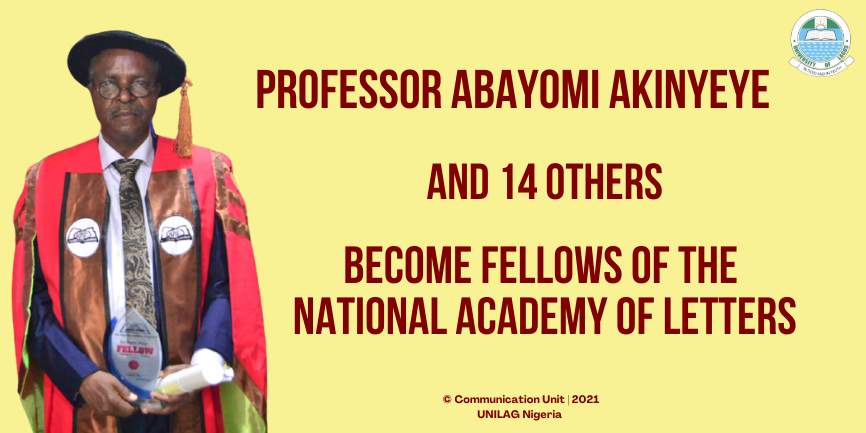 UNILAG Professor of History, Abayomi Olajompo Akinyeye, FNAL, and fifteen other distinguished academics from across the world, have swelled the ranks of Fellows of the National Academy of Letters (NAL)

The Idanre-born specialist in Military History, International Relations, Strategic Studies and Regional Integration was honoured with the fellowship at the Twenty-Second and Twenty-Third (Combined) Convocation and Investiture of the Academy held at the J.F. Ade-Ajayi Auditorium of the University of Lagos on Thursday, August 12, 2021.

In his address, President of the Academy, Professor Francis Egbokhare, FNAL noted that the events could not hold last year due to the global COVID-19 pandemic. That, therefore, necessitated the Investiture of two (2) sets of Fellows at this year’s Combined Convocation Ceremony. He stated that, as a rule, NAL does not confer its Fellowship Awards on no more than six (6) distinguished Professors in a year, adding that the body only gives recognitions to diligent and eminent scholars for their outstanding contributions to knowledge rather than for their occupation of administrative positions.

Professor Tanure Olajide, NNOM and Professor Simeon Olusegun Ilesanmi were honoured as Overseas Fellows, while Most Reverend, Bishop Dr. Matthew Hassan Kukah was conferred with the Honorary Fellow of the Academy.

The Vice-Chancellor, Professor Oluwatoyin Ogundipe, FAS, congratulates Professor Akinyeye, FNAL, and the other awardees on the well-deserved honour bestowed on them.