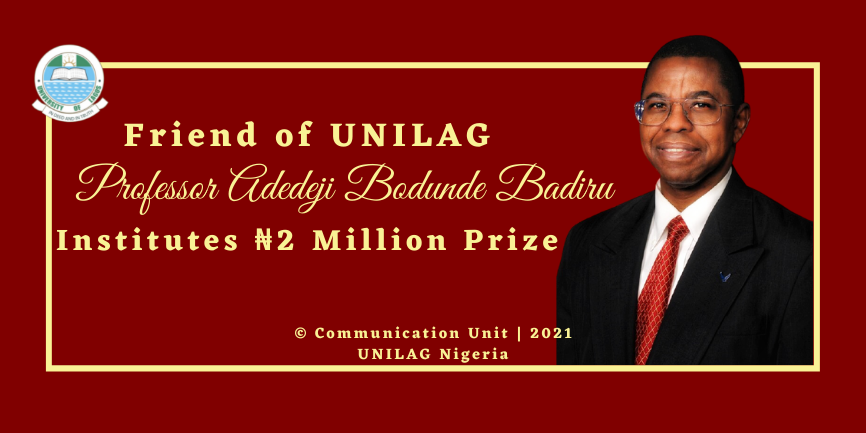 The Professor Adedeji Bodunde Badiru Prize for Best Graduating Student in Systems Engineering for the next ten (10) years was officially instituted on Monday, July 19, 2021 at the Office of Advancement, University of Lagos (UNILAG).

Professor Adedeji Bodunde Badiru is the Dean, Graduate School of Engineering and Management, Air Force Institute of Technology (AFIT), United States of America. He is an astute professor of Systems Engineering who has interacted with the University of Lagos, particularly the Department of Systems Engineering, since the 1960s. Over the years, despite not being a graduate of the University of Lagos, the erudite scholar has visited the University as an external examiner, keynote speaker etc. During one of his visits, he donated notable books in the field of systems engineering to the Departments’ library.

Prof. Badiru has contributed tremendously to knowledge in systems engineering. He was presented a Lifetime Achievement Award by Taylor and Francis Group, a renowned publishing group in London. Outside academic activities, Prof. Badiru engages in paintings & crafts and writes motivational poems, editorials and newspaper commentaries.

After the presentation, Mr. Dare appreciated the donor and further enlightened the donor, through his representative, of other needs of the University. He especially intimated him with the P3P Strategy (Pick a Project; a Programme; a Person) initiated by the Vice-Chancellor, Prof. Oluwatoyin T. Ogundipe, FAS, and encouraged him to consider investing in the educational advancement of indigent students in the University.

Dr. Akano, Head, Department of Systems Engineering, expressed his heartfelt gratitude to Professor Badiru for considering the Department worthy of receiving such an endowment. In addition, he appreciated the Office of Advancement and the University authorities for not slowing the endowment process with bureaucracy.

In response, Dr. Asaolu on behalf of Prof. Badiru, asserted that it was a pleasure for him to give back to the University community and by extension contribute to the advancement of education in his home country, Nigeria. He informed that he usually encourage his fellow Nigerians in diaspora to do something to improve the educational system in Nigeria.

He commended the University for having a functional system on ground for the administration of such endowments, grants, awards or prizes. He asserted that the endowment is just one out of the many contributions he intends to make to the University in the future.