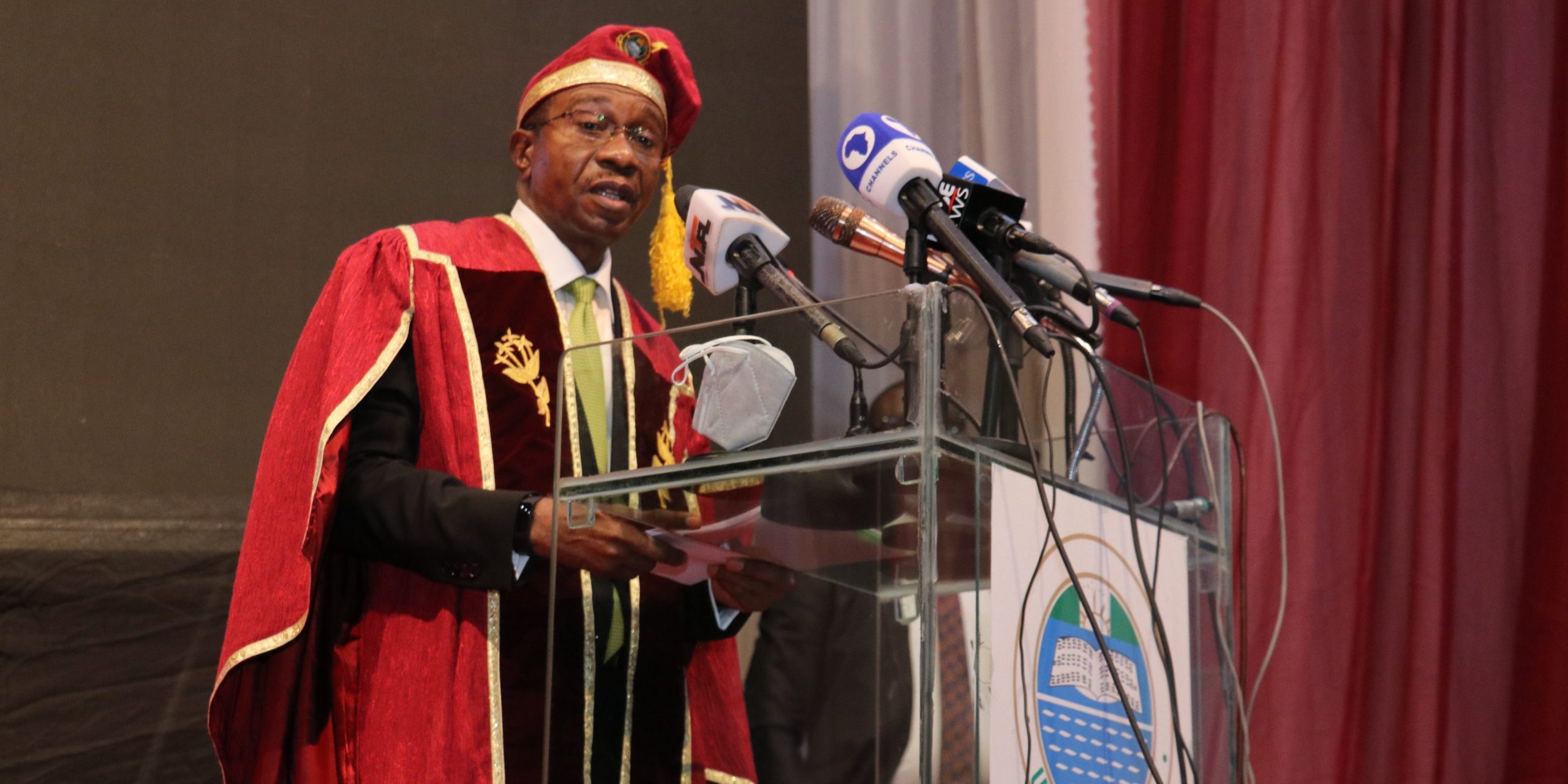 A foremost Economist and Governor of the Central Bank of Nigeria (CBN), Mr. Godwin I. Emefiele, CON has called on the governments of Nigeria at the national and sub-national levels to support university graduates with start-up funds in a bid to encourage entrepreneurship in the country.

Mr. Emefiele made the call at the 51st Convocation lecture of the University of Lagos titled” National Development and Knowledge Economy in the Digital Age: Leapfrogging SMEs into the 21st Century” which held at the J.F Ade-Ajayi Auditorium. The event had in attendance seasoned academics and professionals, traditional rulers and key industry players from different works of life; among whom were the Pro-Chancellor, Distinguished Senator, Prince (Dr) Olanrewaju Tejuoso, Chairman of Platform Capital, Dr. Akintoye Akindele, Convocation Lecture Chairman, Pastor (Dr) Tunde Bakare, a former Minister of Works and Hosuing, Senator Adeseye Ogunlewe, Distinguished Professor Ayo Ogunye, founder of the Trinity House, Pastor Ituah Ighodalo; Emeriti Prof Soga Sofola and Olayide Abass amongst many others.

Speaking during the event, Mr. Emefiele bemoaned the dwindling fortunes of the nation during the past months. He remarked that the drop in crude oil prices, and reduction in Nigeria’s oil production quota, as well as the significant decline in government revenue and foreign exchange earnings were recorded as a result of the impact of COVID-19 on the nation’s economy. However, he explained that the aftermath of the devastating effect has greatly improved with unprecedented counter-cynical measure aimed at containing the effects of the pandemic and driving the recovery of Nigeria’s economy.

Whilst he acknowledging the impact of the pandemic to include job losses, low productivity and weak growth, the CBN boss that the opportunity to accelerating economic growth and employment generation could be awakened with a vibrant and growing SME sector, which he stressed will create jobs in both rural and urban communities.

In the same vein, he advocated the adoption of technology as a critical step in the process while alluding to the fact that Nigeria’s current economic situation and the large vibrant, growing youth population requires an accelerated adoption of digital knowledge to drive Nigeria’s developmental goals; despite the financial constraint that has hindered SMEs from accessing innovative tools that could enable greater expansion.

The former Zenith Bank Chief said the Central Bank of Nigeria has contributed significantly to the development of SMEs in Nigeria just as it has continued to roll out massive developmental interventions in some critical sector of the Nigerian economy, especially in agriculture, manufacturing and SMEs in order to drive industrialization and socio-economic transformation.

Despite the strides that has so far been recorded, Mr. Emefiele was of the opinion that SMEs’ potential in enhancing economic growth is grossly hampered by limited access to finances, inadequate infrastructure and digital knowledge penetration. He therefore used the occasion to call on governments to promote entrepreneurship as a viable means of solving the unemployment problems in the country. “Providing support for SMEs to thrive is a win-win situation for both government and firms. While government could invest in infrastructure and provide other support to SMEs; SMEs in turn create employment opportunities and pay taxes to government, which help to support more inclusive growth of our economy” he remarked.

Earlier, in his remarks, presiding pastor and founder, Citadel Global Community Church, Pastor Tunde Bakare, who was the Chairman of the occasion, took the audience through his story from a child of “Nobody to a Man for Everybody”. A tale, he revealed was to highlight the inescapable ingredients for success in the graduating students ‘transition into the global marketplace. Pastor Bakare who is also an alumnus of the university lauded the graduating students who he acknowledged that their years of diligence is finally being rewarded. He however, noted that for excellence to be achieved post-graduation, two twin qualities must be inherent – character and learning, values and competences, integrity and skill.

The Vice Chancellor, Prof Oluwatoyin T. Ogundipe, FAS in his opening remark highlighted the University’s achievements in the last one year particularly, in the areas of research, internalisation, infrastructure upgrade and other facets. He enumerated on students winning laurels both locally and internationally, thereby depicting the academic excellence the University portrays.

He had earlier led other dignitaries to different sites on campus to commission completed projects and a tour around the exhibition tent.

The completed project includes the Natural Museum, donated in honour of the Vice Chancellor by Platform Capital; the vertical extension of the Deans office, Faculty of Engineering which was donated by the class of 1985; the unveiling of the zero emission vehicle and the Ambuvent, – a  highly specialized equipment put together by thorough-bred researchers aimed at proffering solution to respiratory challenges associated with COVID-19 and other respiratory issues and presently undergoing clinical trial.

The event marked the commencement of the week-long activities of the institution’s convocation ceremonies after its earlier postponement last year.

Watch the Livestream of the UNILAG 2019 Convocation Lecture by clicking the play button below:

Security Advisory to the University of Lagos Community
August 9, 2022