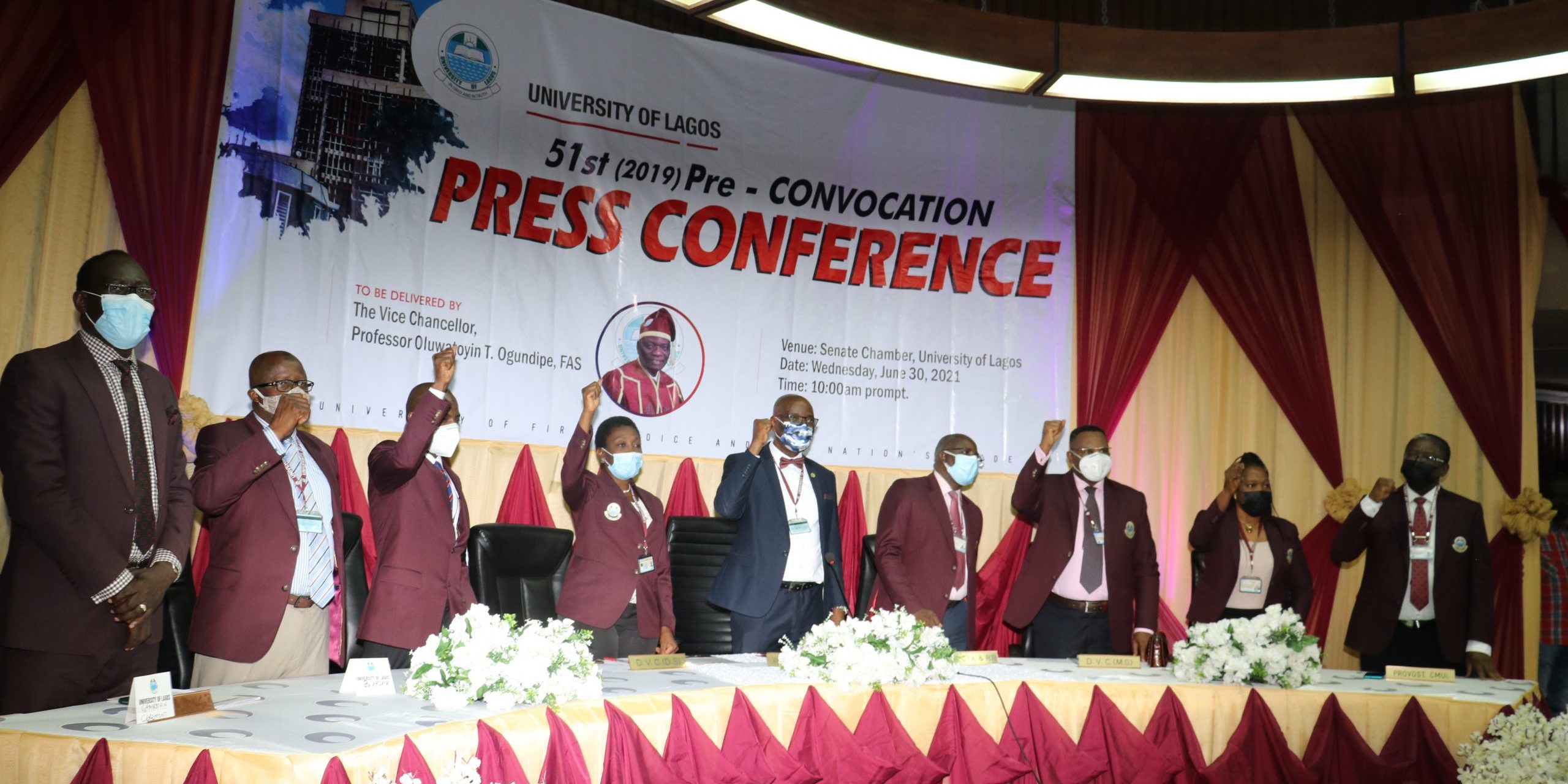 The Vice-Chancellor, University of Lagos, Professor Oluwatoyin Ogundipe, FAS, says programmes of the University are being modelled to solve specific local and national issues thereby providing balance between theoretical principles and the practical applications of scientific, innovative and creative endeavours.

In this regard, Prof. Ogundipe says researchers in the University of Lagos secured a total of 11 patents between 2019 and 2020 out of which four have been successfully prototyped.

This formed part of the success stories in the last one year, as reeled out by the Vice-Chancellor while addressing journalists at a Press-Conference to flag off activities for the 2018/2019 Convocation Ceremonies being the 51st of the University.

Professor Ogundipe recalled events after March 2, 2020 when he addressed a Pre- Convocation Press Conference which culminated into the cancellation of the ceremonies, describing it as a sad event in the annals of the University.

He however lauded the President, Federal Republic of Nigeria and Visitor to the University; President Muhammadu Buhari, the Federal Ministry of Education and the National Universities Commission (NUC) for their intervention which ended the reign of the immediate past Governing Council, describing it as a turning point in University administration in Nigeria.

Professor Ogundipe also lauded the maturity of the new Governing Council of the University led by Distinguished Prince Dr. Olanrewaju Tejuoso and his commitment to restoring the University of Lagos to the path of peace and ground-breaking progress.

The Vice-Chancellor stated that the University’s strides in research has attracted over eighteen billion naira (N18bn) in grants both locally and internationally.

Reeling out activities for the 51st Convocation Ceremonies, the Vice-Chancellor said the Convocation Lecture titled: National Development and Knowledge Economy in the Digital Age: Leapfrogging SMEs into the 21st Century, will be delivered by the Governor of the Central Bank of Nigeria; Mr. Godwin Emefiele on Monday, July 5, 2021 under the chairmanship of the founder, Citadel Global Community Church, Pastor Tunde Bakare.

According to the Vice-Chancellor, a total of 15, 753 students will be graduating during the three-day convocation ceremonies (from Tuesday, July 6 to Thursday, July 8, 2021) comprising 7,754 (49.2%) in the first-degree category and 7,999 (50.8%) in the postgraduate category while 160 students will also be awarded Diploma certificates in Social Works and Human Kinetics.

Speaking on sundry issues as raised by journalists present at the Senate Chamber of the University of Lagos for the 2019 Pre-Convocation Press Conference especially the ugly incident which involved a 300 level Intensive Continuing Education (ICE) Programme of the University; Chidinma Ojukwu, Professor Ogundipe gave details confirming her status as a student of UNILAG, he however noted that her case is with the state and the University management has no jurisdiction over it.

The Convocation activities continue on Friday July 2, 2021 with a Jumaat Service at the University of Lagos Mosque while a Thanksgiving Service holds on Sunday, July 4, 2021 at the Chapel of Christ our Light.