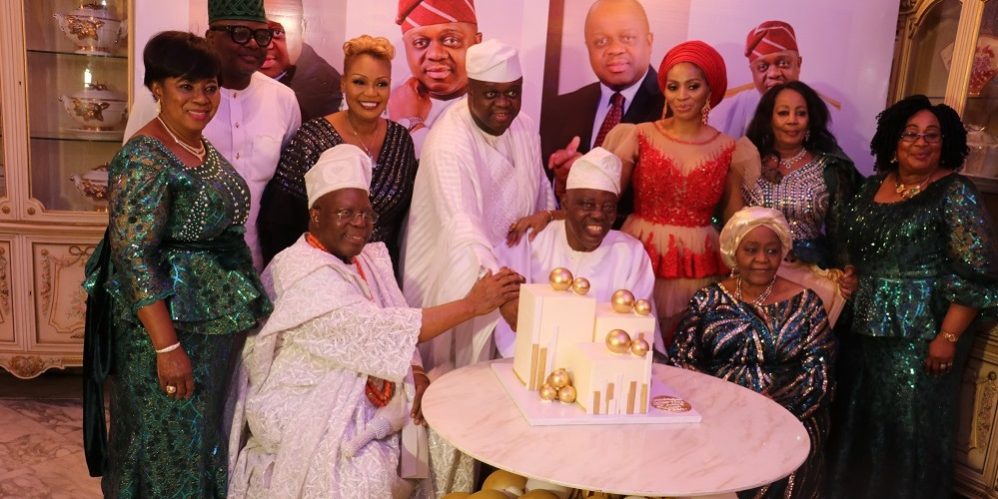 On Saturday, May 22, 2021, billionaire industrialist and Aare of Lagos, Chief Razak Akanni Okoya, hosted the newly appointed Pro-Chancellor and Chairman, Governing Council, University of Lagos (UNILAG), Prince (Dr.) Olanrewaju Adeyemi Tejuoso to a tasteful dinner in celebration of his appointment as UNILAG’s Pro-Chancellor.

The dinner, which was held at the Olúwa ni Solá Estate, was well attended by the crème de la crème of the Nigerian social scene, as well as members of the University of Lagos Management. It featured congratulatory speeches from: Oba Adedapo Adewale Tejuoso, the Osile of Oke Ona Egbaland and father of the Pro-Chancellor; Chief Okoya, the industrialist extraordinaire, father-in-law of the Pro-Chancellor and host of the evening; Vice-Chancellor, UNILAG, Professor Oluwatoyin T. Ogundipe, FAS, and several other notable personalities.

The Pro-Chancellor expressed his profound appreciation for the dinner held in his honour as well as for the various head-swelling eulogies and goodwill messages of the evening. He acknowledged with humility the importance his father and father-in-law place in the honour that comes with the position of the University of Lagos Pro-Chancellorship and avowed that he would work hard to deliver on his mandate as the honoured appointee of the office.

Prince Tejuoso asserted that it was time for a positive wind to blow in the University of Lagos and intimated the gathering that his cabinet, in collaboration with the University Management intends to achieve the best possible results for the advancement of the University. He appreciated all those that have wished him well and still nurture intentions to host more celebratory parties for his appointment. “It is time to get to work”, he said to them, “let the celebrations henceforth be for the feats we achieve”.

The glamorous evening ended with photographs, cocktails and camaraderie.