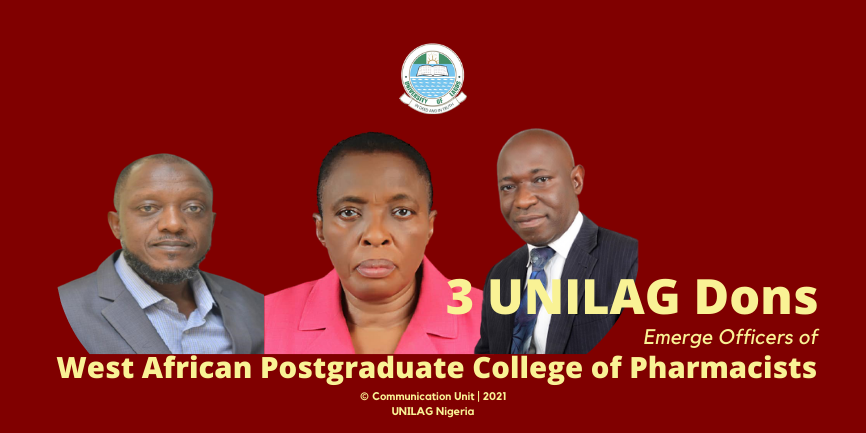 The University of Lagos recorded another winning string at the Annual General Meeting, Scientific Symposium and Council Meeting of the West African Postgraduate College of Pharmacists (WAPCP), where three of her academicians were elected into top positions of the College.

The event which held at the Ghana Academy of Arts and Sciences Conference Centre in Accra, the Ghanaian capital, saw Distinguished Professor Cecilia Ihuoma Igwilo clinching the Presidential seat of the College, Professor Ibrahim Adekunle Oreagba winning the post of the Secretary General and Dr. Olufunsho Awodele becoming Chairman, Faculty of Public Health.

The election was part of highlights of the 32nd and 33rd (Combined) Annual General Meeting & Scientific Symposium and 62nd & 63rd Council Meeting of the West African Postgraduate College of Pharmacists (WAPCP) which held with the theme; Universal Health Coverage: The roles of digital and collaborative services.

The new WAPCP President, Prof. Cecilia Ihuoma Igwilo is Nigeria’s first female professor of Pharmacy having become one in 1994. She attended University of Ife (now Obafemi Awolowo University, Ile-ife) where she bagged a Bachelor of Pharmacy degree with First Class honours in 1977 and a Master of Science degree in Pharmaceutics in 1979. She obtained a Ph.D. in Pharmacy in 1983 from Chelsea College, University of London.

Prof. Igwilo served as the Acting Head/Head, Department of Pharmaceutics and Pharmaceutical Technology from 1993-1999, she was Dean, School of Pharmacy, University of Lagos from 2001 to 2003. She has also served as Director, Academic Planning Unit (2006-2012) and Director, School of Foundation Studies (2012-2016)

The new Secretary General of WAPCP; Prof. Ibrahim Adekunle Oreagba is currently the Head of Department of Pharmacology, Therapeutics and Toxicology, College of Medicine University of Lagos. He is also a Lead investigator at the African Centre of Excellence for Drug Research, Herbal Medicine Standardisation and Regulatory Science of the University of Lagos.

Prof. Oreagba is a Consultant Pharmacist and Clinical Pharmacologist with a Masters and Doctorate degree in Pharmacology. He also has a Post Graduate Certificate in Pharmaco-epidemiology and Pharmacovigilance from the London School of Hygiene and Tropical Medicine London U.K. He is also a seasoned resource person and examiner of the the West African Postgraduate College of Pharmacists (WAPCP).

Dr. Awodele recently served as a Toxicologist with International Maritime Organization London on Evaluation of Hazards of Harmful Substances carried by Ships.

The vision of WAPCP is to be internationally recognized as a center of excellence that promotes the teaching, research and training in postgraduate pharmacy education for the development of pharmacy specialists to meet the challenges of health care.

The term of office of the three elected UNILAG dons is to run till 2023.

He commends them for sustaining the University’s winning spirit especially at such a continental level.

Prof. Ogundipe describes their feats as lending credence to the status of the University of Lagos an Institution of first choice and the Nation’s pride.