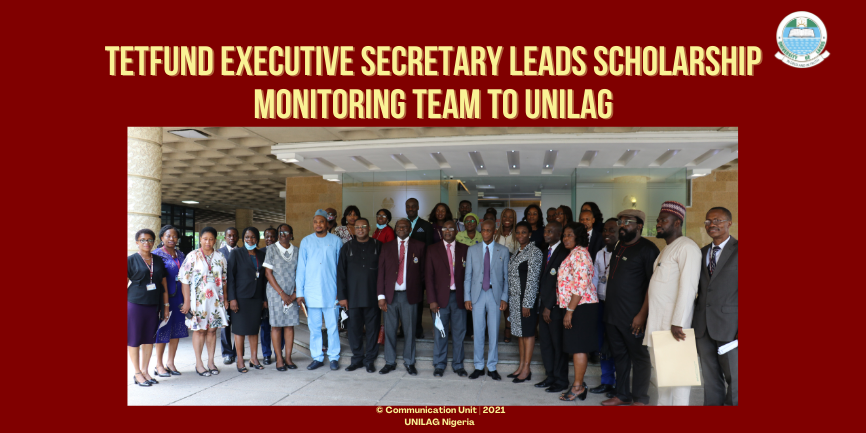 The Executive Secretary of the Tertiary Education Trust Fund (TETFUND) Professor Suleiman Elias Bogoro, FAS, led a Monitoring Team of officials to the University of Lagos on Monday, April 26, 2021.  They were on ground to make an assessment of the Academic Staff Development Programme at UNILAG from 2015 to date.

Received by the Deputy Vice-Chancellor (Academics & Research), Professor Oluwole Familoni, FAS, at the Senate Building, the Executive Secretary expressed delight at being at the University of Lagos, a university he said has repeatedly justified investments made by the Fund. He singled out UNILAG for praise for remaining a globally competitive research powerhouse and for being the source of many globally acclaimed medical science research breakthroughs. He commended the impact of the Academic Staff Development Programme in UNILAG, emphasizing that the output of UNILAG scholars with funding from the TETFUND is one that compels the funding body to want to do more for the Higher Education sector in general.

“Because of what you are doing in research, we respect you”, Professor Bogoro said of the University of Lagos.

The Deputy Vice-Chancellor stood in for the Vice-Chancellor, Professor Oluwatoyin Ogundipe, FAS. In his Welcome Address, he expressed profound gratitude for the generous support of TETFUND for the University of Lagos in terms of infrastructural and human capacity development. He mentioned the Scholars’ Suite, which became a reality owing to the personal dedication of the Executive Secretary to the concept as shared with him by the Vice-Chancellor. He also referenced the performance of UNILAG scholars in the 2019 and 2020 National Research Fund exercise of the funding agency, which witnessed the emergence of 14 UNILAG scholars as winners in 2019, funded to the tune of  N419 million and 16 scholars in 2020 funded with the same amount. Professor Familoni enjoined the TETFUND to do more for UNILAG, with special attention paid to the peculiarity of her topography when it comes to funding infrastructural development.

The TETFUND Executive Secretary then went on to interact with the Scholars, some of who called in from their campuses via Zoom. He expressed delight at their rising in their respective careers, especially after the completion of their doctorate. He disclosed that TETFUND support for the doctorate programme is now for four years in order to give beneficiary scholars the maximum support they could ever need for the completion of their programmes.

Professor Ayodele Atsenuwa, Deputy Vice-Chancellor (Development Services) gave the vote of thanks.  She appreciated the TETFUND’s immense support for the University of Lagos and reiterated the determination of the university never to let the funding agency down.