You are here:
Institute of Africa Diaspora NewsUnilag General News 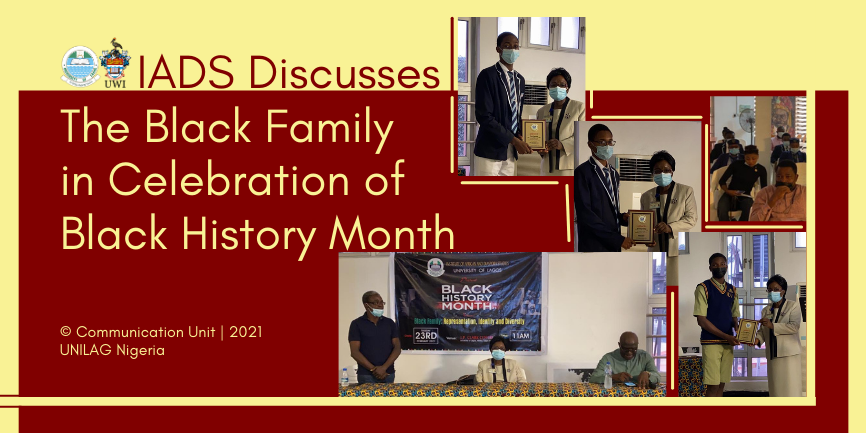 The month-long event, which is celebrated around the world, received the Midas touch of Unilag IADS on Tuesday, February 23, 2021 at the J. P. Clark Centre, University of Lagos. It was on this day that the Institute marked the month by hosting an intergenerational event.

The event witnessed the display of the research skills and penmanship of secondary school students in an essay writing competition on the topic: “The Black Family and the COVID-19 Pandemic”. It further featured a keynote speech by Professor of Philosophy at the University of Ibadan, Adesina Afolayan on the theme of the year, Black Family: Representation, Identity and Diversity.

In his speech, Professor Afolayan, bemoaned the increasing rate of emigration of brilliant young and promising families from the Nigerian nation to foreign lands. He called on the Nigerian government to act fast as the case is no longer limited to brain drain of the nation but has now aggravated to family drain whereby the future generations of brilliant and vibrant Nigerian men and women are being relocated to other countries. He posited that if necessary action is not taken to improve upon the nationʼs infrastructure, security and opportunities, Nigeria’s future may become bleak sooner than later.

The essay competition organised among secondary school students by IADS was also a focal point of the Black History Month celebrations as it involved the younger generation in the history and present realities of the African family. After a carefully planned selection process, as is a customary practice of the Institute of African and Diaspora Studies (IADS), George-Taylor Taiwo Jacob, of C.M.S Grammar School emerged first (1st) place winner with a total of 147 points, while Nnabuchi Prosper of the same school and Ekueme Great Chizerem, of Igbobi College, Yaba, claimed second (2nd) and third (3rd) place with 145 and 144 points respectively.

Other secondary schools that participated in the competition are: Dansol High School, Queen’s College, Lagos and UNILAG International School.

Black History Month, which used to be celebrated as Negro History Week, was created in February 1926 by an historian, Carter G. Woodson, now known as the “father of Black history.” Being one of the first scholars to study the history of the African diaspora, Woodson was quoted to have said that: “Those who have no record of what their forebears have accomplished lose the inspiration which comes from the teaching of biography and history.”

Interestingly, February 21st of every year is also dedicated to the world wide observance of the International Mother Language Day. At the event organised by IADS, Nigerian citizens, home and abroad were also urged to play their part in preserving the different cultures of the country by encouraging their children to speak in their mother-tongue and keep the culture of the land alive.

We the people, our uniqueness, brilliance, humour, strength and diversity is what makes Nigeria, Nigeria. Let’s remember our roots, teach it to future generations, and not stray far from home.