After 41 Years of Meritorious Service, Professor Agomo Bows Out in Style with Exaugural Lecture 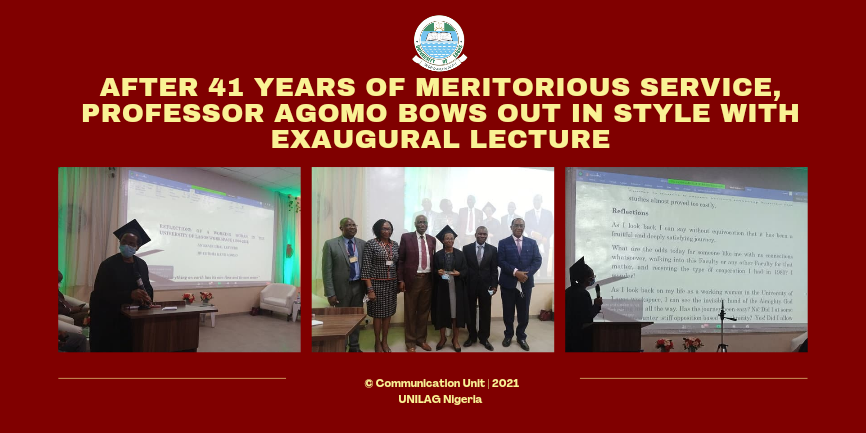 At a blended event held at the Faculty of Law Annex on Thursday, February 25, 2021, Professor Chioma Kanu Agomo, bowed out of university academic service with a well-delivered, wisdom-laden Exaugural Lecture.

The lecture, which was titled, “Reflections of a Working Woman in the University of Lagos Workspace (1980-2021), encapsulated the 41 long years of Professor Agomo’s meritorious service at the University of Lagos, which started in 1980 as a Youth Corps Member and will be rounding off in March 2021 as a renowned Professor of Labour Law and Gender Studies.

Professor Agomo, in her lecture, reflected on the many instances of God’s goodness toward her and expressed gratitude to the many individuals, who have chipped in with their willing support for her in the course of her storied career as an Academic.

A person of history, Professor Agomo joined UNILAG as the third female lecturer to so do. She became the first female Dean of the Faculty of Law in 2004 and rounded off her tenure in 2008 with many outstanding contributions to the Faculty. The Moot Court, ICT System for Lecturers and ICT Library for Students were some of her deliverables as Dean.

The Vice-Chancellor, Professor Oluwatoyin Ogundipe, FAS, described Professor Agomo as a consumate professional, a mother and dogged defender of truth. He called her the “Deborah of our time”, on account of the leading role she played in defence of compliance with the University Act when the former Council purported to have removed the Vice-Chancellor from office.

The event was attended by over 200 on-line participants, including her former students, supervisees, friends and family, all of whom had very endearing words to say about the professor.

Professor Chioma Kanu, apart from short stints away on Sabbatical, spent all her working years within the University of Lagos Community. She started in August 1980 as a Youth Corper and will be bowing out on March 1, 2021, as a Professor – the most senior and the longest-serving in the history of the University of Lagos. She is also the first retiring professor of the Faculty of Law to be so celebrated.

She dropped many nuggets of wisdom, distilled from her years in service, one of which is as follows:

“Decisions taken when one’s ego is wounded often turn out to be bad decisions with regrettable consequences. Never take a decision on rebound!”