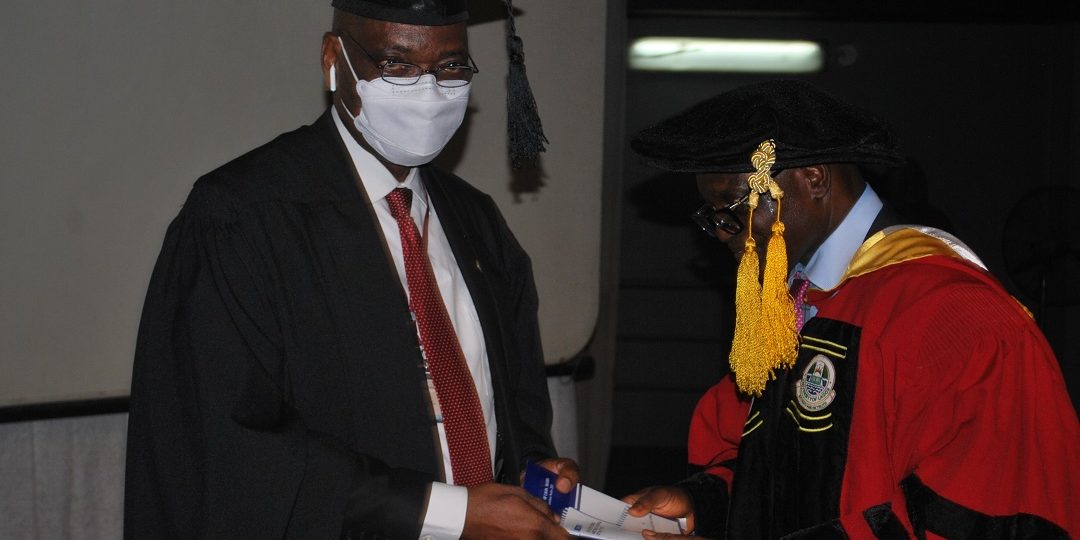 Professor Olajide A. Olawale was born on 8th August 1959 in Iboro, Yewa North Local Government Area, Ogun State where he attended St Peter’s Anglican Primary School, Joga Orile, Yewa North LGA, Ogun State for his primary school education.  He proceeded to Yaba Academy, Abule Ijesha, Yaba, for his secondary school education which he completed in November 1974. In June 1978, he obtained the General Certificate Education (Advanced Level) certificate and then gained admission into the University of Lagos by October of the same year for the Bachelor of Science degree (B.Sc) programme in Physiotherapy.

He is a Professor of Physiotherapy, College of Medicine at the University of Lagos. His field of interest is Neurological Physiotherapy and area of specialization is Stroke Rehabilitation.

In his Inaugural lecture titled: “Life after Stroke: More Than a Survival of the Fittest”. He spoke on the meaning of rehabilitation of a stroke survivor as well as explaining the origin & meaning of the expression “survival of the fittest” and where it applies to the life of a stroke survivor. He went further by telling the history of Physiotherapy within British, American & the Nigerian perspectives.

His lecture emphasized that stroke is a major health problem in every part of the world. He described it as a life-threatening neurological condition of the elderly & the most common cause of adult disability. A condition that he posited is rampant in men than women. Even though, the condition in women is more deadly. He mentioned that large numbers of survivors are left with a variety of deficits, including impairments of sensory, motor, mental, perceptual and language functions which have great impact on healthcare & society.

He has meritoriously served outside the shores of Nigeria. For instance, from 2005 to 2008, he was on an assignment for The Commonwealth (as a technical expert under the Commonwealth Fund for Technical Cooperation, CFTC) to plan and run the undergraduate programmes in Physiotherapy at the School of Allied Health Sciences, College of Health Sciences, University of Ghana, Accra, Ghana.

Professor Olawale has supervised several undergraduate and postgraduate dissertations and theses; and served as external examiner to University of Ghana, Accra, Ghana, University of Health and Allied Sciences, Ho, Ghana, University of Kwazulu-Natal, South Africa and six (6) universities in Nigeria. He has served as team leader and member of accreditation teams for National Universities Commission (NUC) and the Medical Rehabilitation Therapists Board of Nigeria (MRTB). He has also served the Nigeria Society of Physiotherapy (NSP) with sterling qualities and dedication. As the Chairman, Education Committee of NSP (February 2001 – October 2004; February 2009 to January 2010), he was engaged in the organisation of seminars, conferences and workshops that enhanced the growth and development of Physiotherapy practice in Nigeria. He has attended over 30 local and international conferences and workshops and presented papers at many of them. He has over 50 publications in peer-reviewed national and international journals.

He became a Fellow of Nigeria Society of Physiotherapy (NSP) in November 2014. He was given Excellent Service Award by the Department of Physiotherapy, College of Medicine, University of Lagos in 2016. The Lagos Physiotherapists Forum gave him the Award of Special Recognition and Students’ Choice Award in December 2017.

Within this field, he has carried out research activities involving exploration of different domains of stroke rehabilitation. Results of such studies have great implication for clinical practice.

With the lecture, he becomes the 3rd Professor to deliver an inaugural in the field of Physiotherapy at the University of Lagos after Professor Owoeye in (2002) and a former Deputy Provost, CMUL, Prof. Akinbo in (2016).