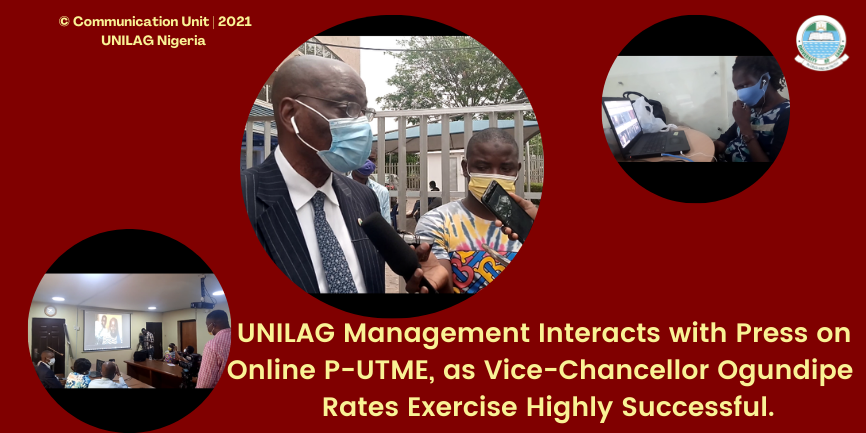 On Monday, February 22, 2021, the Management of the University of Lagos interacted with members of the Press on the Online Post-Unified Tertiary Matriculation Examination (P-UTME).

At the Unilag Consult Building, which serves as the operating/monitoring station of the online examination, the Vice-Chancellor, Professor Oluwatoyin Ogundipe, FAS, stated that over 22,000 candidates applied for the P-UTME; and as of Saturday, 20th February, 15,000 of them had sat for the cloud-based testing system.

Being a virtual system, candidates sat for the test from every part of the world, with the scheduling done in a manner that would accommodate  as many participants as possible, while guaranteeing each one a seamless experience.

The Vice-Chancellor informed the Pressmen that on the first day, a total of 1500  candidates wrote the exams. 34 of these registered various complaints, all of which were addressed, with some having their exams rescheduled. No candidate was logged out of the exam. People who flout the rules, however,are warned and flagged; but not prevented from completing using up the time allocated to them.

A total of 40 Questions of English, Maths and General Paper were served the candidates, to be completed in 30 Minutes.

Professor Ogundipe bemoaned the level of decadence among young Nigerians, as evident in the many pranky acts of candidate captured on the webcam monitoring. Much against the rules of the examination, many of the candidates were seen on live recording engaging in malpractices. There were a sizable number of candidates who comported themselves appropriately, and both cases were showed live to the Pressmen.

There are recordings of the over 15,000 candidates who have written the exam. 900 Candidates in total were flagged and their participation is subject to subsequent review.

The Vice-Chancellor described the process as a largely successful one, with unsubstantiated complaints coming from a very small minority ( 2.5%) of candidates. He advised that parents should impart values and character into their wards, instilling in them the self-confidence that they can succeed, through self-reliance and hard work.

A total of 225 candidates have been rescheduled to retake the examination today, Tuesday, February 23, 2021, including those who did not show up at all.