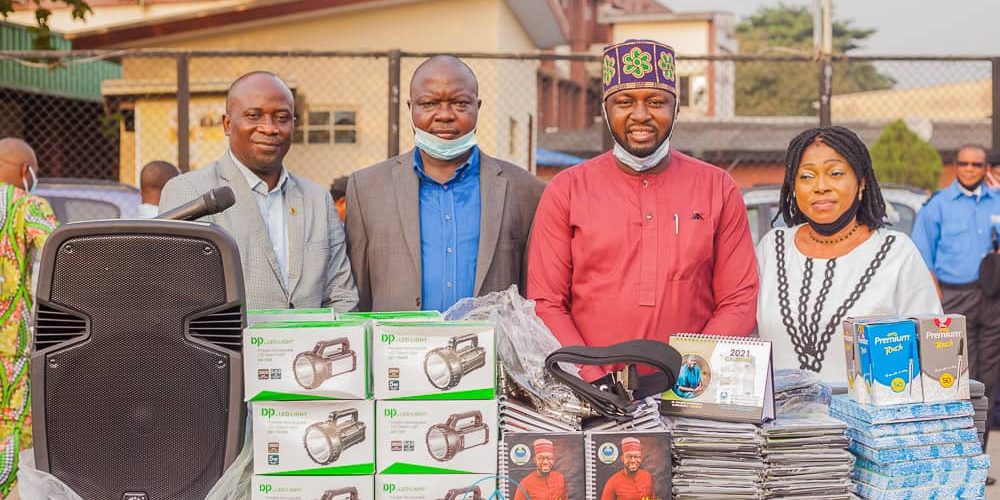 He said the presentation was in fulfillment of the promise made during his period of campaign on Monday, November 16, 2020.

“I brought these items which include Security Berets, Torch Lights, Stationeries, Security Belts, Whistles, Public Address System, Table Calendars and jotters because it is a promise kept”.

“At the last Alumni elections on Sunday, December 13, 2020, the security not only voted massively but also provided security when things almost went chaotic”, he further said at the security parade ground.

The Executive Director of Benjamin Olowojebutu Foundation, added that he decided to serve humanity after he survived an accident some years ago. He also promised to repair some damaged patrol vans, towing vehicle and other problems plaguing the Security Unit.

In response, Mr. Sunday Alao, Chief Security Officer of UNILAG, thanked Dr. Olowojebutu for living up to his campaign promise and also set a remarkable record as the 1st Chairman of UNILAG Alumni Lagos Branch to look into issues concerning the Security Unit. He however, asked for more assistance from Dr. Olowojebutu.

Dr. Olowojebutu decorated Mr. Collins Otu, a member of Security Unit, who was committed towards his quest of becoming a chairman, with belt and beret