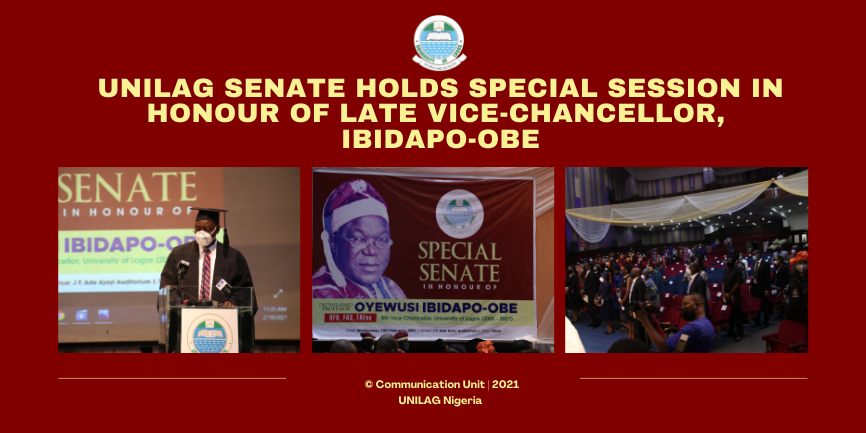 Friends, family, former colleagues and mentees were all on ground to pay tributes to a man everyone agreed was a genius, a scholar in his own class and an administrator per excellence.

Leading the trail of tributes was that of the Dean of the Faculty of Engineering, Professor O.M Sodiq. He described the former Vice-Chancellor as a mentor to many, who would always task people to give their best to whatever assignment they had in hand.

Professor Rahamon Bello, FAEng, the immediate past Vice-Chancellor, described the late Distinguished Professor as an all-rounder – sociable, scholarly and professional to the core.

The Leader of the Waterloo Group of Scholars in UNILAG, Professor Ayo Ogunye, also paid glowing tributes to a mentee, who he said never disappointed the early hope he had of him from the day of their first encounter in 1976.

Professor Oluwatoyin Ogundipe, FAS, the current Vice-Chancellor, extolled the 8th Vice-Chancellor as a man of records and of history. He emphasised his record-laying emergence as Professor at the age of 34 as evidence of his total commitment to his calling as a Scientist and Scholar. He also commended the many strides he made at the level of Higher Education Administration in UNILAG and all over the country, remarking that the University of Lagos would forever be proud of his legacy.

Quite significantly, it was the birthday of the former Vice-Chancellor’s widow, Chief Barrister Olusola Ibidapo-Obe, and the Special Session of the Senate celebrated her.

Late Distinguished Professor Oye Ibidapo-Obe was appointed the 8th substantive Vice-Chancellor of the University of Lagos on 1st May 2002, a position he held till the end of his tenure on 30th April 2007.  He passed on to glory on Sunday, January 3, 2021.