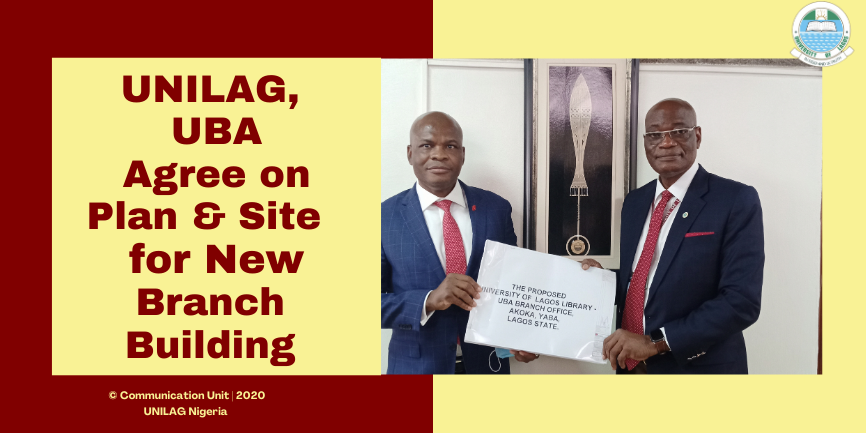 It has been 7 long years in the works. On Friday, February 5 2021, however, the vision to have an iconic building that will serve as a branch of the United Bank for Africa (UBA) received a boost with the adoption of the Senate-approved proposal for the construction project.

Led by the Deputy Managing Director, UBA Nigeria, Mr Ayoku Liadi, the UBA delegation was received by the Vice-Chancellor, Professor Oluwatoyin Odundipe, FAS, at his office on the 11th Floor of the Senate Building.

Mr Liadi expressed gratitude to the University of Lagos community in general and to the Vice-Chancellor, in particular, for their open-handed support and continued loyalty. On account of that, he said, the UNILAG Branch of UBA has grown in leaps and bounds to have the largest customer base on campus. He showed delight at the project finally coming to fruition, adding that will further cement the long-standing relationship between both institutions.

The Vice-Chancellor, in his response, traced the relationship between both institutions back to the 1960s when the United Bank of Africa became the first banking institution to open a branch on the University of Lagos campus. He appreciated the bank for their steadfast support for the university in all areas, the highlight of which is the establishment of a Professorial Chair in Finance. He assured the delegation of the committed support of UNILAG all through the duration of the project.

The proposed building is a 4-storey edifice. It will house the United Bank for Africa (UBA) on the 1st and 2nd Floors, while the 3rd and 4th Floors will be used as Library by the University of Lagos.