You are here:
Faculty of Law NewsUnilag General News 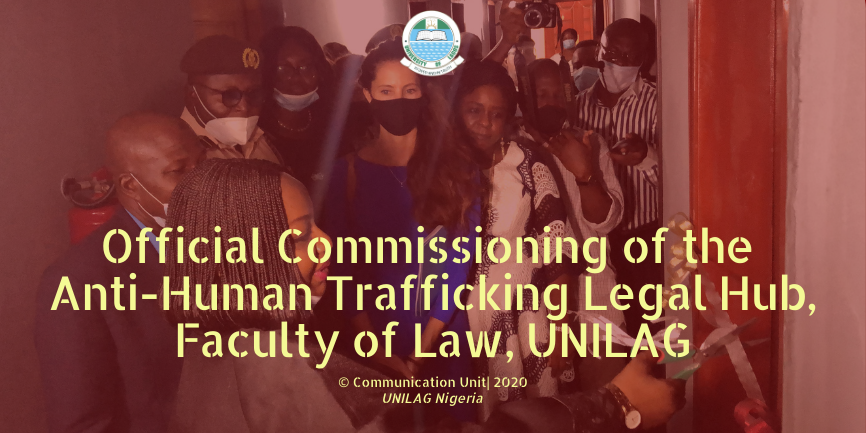 “You may choose to look the other way but you can never again say you did not know.”
— William Wilberforce

Human trafficking is one of the serious crimes which has plagued Lagos state, different parts of Nigeria and the rest of world. It is a gross violation of the rights of victims with dire effects on the victims and their families. It is a crime which some people tend to overlook with very few actual convictions being made.

In a bid to not look the other way, the Anti-Human Trafficking Legal Hub was commissioned at the Faculty of Law, University of Lagos on Tuesday, December 8, 2020.

The Anti-Human Trafficking Legal Hub is a project of the International Organisation for Migration (IOM) aimed at strengthening access to justice for Victims of Trafficking (VOTs), developing organisational capacities on victim-centred approach and driving academic research that will impact legal and policy reforms.

The Dean, Faculty of Law, and representative of the Vice-Chancellor, UNILAG, Prof. Ayo Atsenuwa gave a warm welcome during which she spoke about the Faculty of Law, its activities, programmes, the Centres contained therein – the Centre for Human Rights under which there is the Human Rights Clinic and the Wills Clinic; the West African Centre for Law and Religion Studies, etc. She also expressed excitement over how the Faculty can offer a model towards adopting pedagogy to make the Hub more contextual and relevant to the 21st century while at the same time rendering service to the University.

At the event, the Guest Speaker, the Attorney General of Lagos State and Commissioner of Justice, Lagos State, Mr. Moyosore Onigbanjo, SAN, ably represented by the Director, the Citizens’ Mediation Centre, Mrs. Biola Oseni delivered a speech on the “Realities and Potential Dangers of Human Trafficking”. In the speech, the Attorney-General defined human trafficking, mentioned the causes and its effects on the victims and victims’ families. He also gave some statistics of human trafficking in the world, stated the dangers of human trafficking and the resolution of the Lagos State government on the matter.

The Keynote Speaker, Director-General of the National Agency for the Prohibition of Trafficking in Persons (NAPTIP), Mrs. Imaan Sulaiman-Ibrahim ably represented by Mr. Ganiu Alao Aganran, the Zonal Commander, Lagos gave quite an interesting keynote speech, in which he stated, among several other things, that NAPTIP is highly committed to work with stakeholders in eradicating human trafficking in Nigeria and is open to collaborations with organisations.

The Head, Migration Protection and Assistance Unit, UN Migration Agency (IOM), Saskia Kok, was also present at the event. In her address, she disclosed that, over the years, one of the objectives of IOM, has been to partner with the organisations to review and operationalize national migration policies as well as support NAPTIP, for example, in the pursuance of its goals and objectives. She also mentioned a major challenge which is properly supporting victims of human trafficking, as bringing human traffickers to justice is extremely difficult. In this regard, IOM in partnership with several organisations, will support victims at the Legal Hub through compensations, empowerment, prosecutions of guilty parties, etcetera.

The Chairperson of the Legal Hub, Dr. Iyabode Ogunniran also spoke about the Hub, the reason for its existence, proposed workings of the Hub, and so on and so forth.

The vote of thanks was delivered by the Director of the Office of the Public Defender, Dr. Jide Martins, one of the key partners of the Legal Hub. He thanked everyone for coming and charged all to imbibe the three (3) Cs – Cooperate, Collaborate and Coordinate. He urged all to step up when they are called upon in relation to the anti-human trafficking legal hub, stating that in order to achieve the intended goal, there is the need to Cooperate, Collaborate and Coordinate.

Lastly, the Legal Hub was officially commissioned by Mrs. Biola Oseni at the ground floor of the Faculty of Law, after which a brief tour of the hub was done.