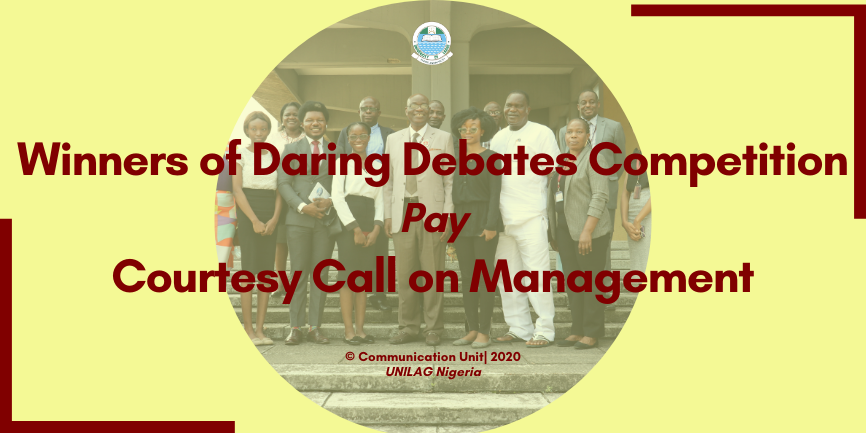 Students of the Mooting Society, Faculty of Law and winners of Daring Debates competition, Gloria Alonge (Global) and Jemima Ojo (African Region) led by the CEO, Edugist, Mr. Elvis Boniface, paid a courtesy visit to the Management of the University on Monday, November 30, 2020.

As winners of the African regional debate, the duo represented Africa at the 6th edition of the global finale held on Monday, November 16, 2020. At the end of the debate competition, our very own Gloria Alonge clinched the first prize, beating other competitors from other regions such as Bangladesh, India, Myanmar, Nepal, Sri Lanka and USA.

Daring Debates is a unique debate series that bring together undergraduates from all around the world in the discourse of critical issues and policy ideation. it was initiated in 2016 by Difficult Dialogue and is held on regional and global levels.

The global finale of the Daring Debates themed: ‘’Is Global Sustainability Profitable for Business?’’ was an integral part of the prestigious global sustainability films awards co-organised by the TVE and Difficult Dialogues.

The Vice-Chancellor, Professor Oluwatoyin T. Ogundipe, FAS, on behalf of the Senate, Management, members of staff and students of the University of Lagos heartily congratulates Miss Gloria Alonge and Miss Jemima Ojo on these feats and wishes them success in their future endeavours.