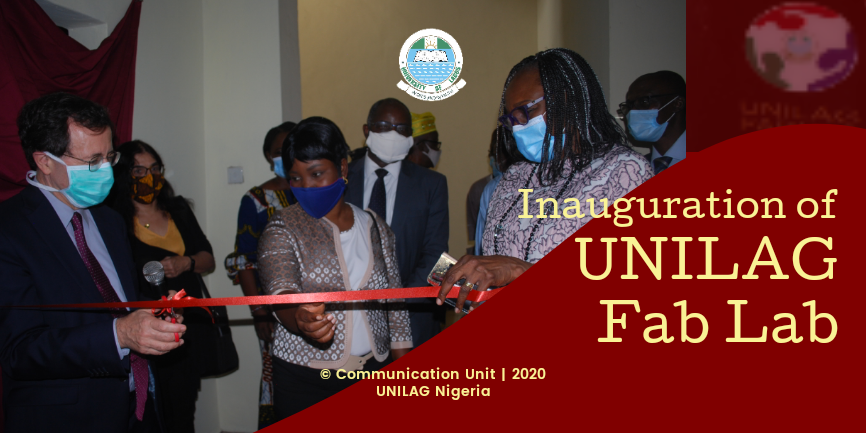 The University of Lagos (UNILAG), recorded yet another remarkable achievement on Friday, October 9, 2020, as it became the first Nigerian university to receive the donation of a digital fabrication laboratory, known globally as Fab Lab, from the Embassy of France in Nigeria.

The presentation of the donation was made by the French Ambassador to Nigeria, Jérôme Pasquier, who was accompanied by the Scientific and University Cooperation Attaché, Ms. Leïla Mathieu.

The University received this donation as part of the Embassy’s project on Research and Innovation in Adapting to Climate Change (AIRACC), in which UNILAG is a keen participant.

AIRACC is a seed project to foster Franco-Nigerian collaboration. It is aimed at creating the right environment for starting research collaboration between few institutions focusing on a shared concern, which is Adaptation to Climate Change.

The UNILAG Team working on this project is led by Dr. (Mrs.) Temitope Onuminya, a Senior Lecturer in the Department of Botany. The team is made up of a new generation of scientists and lecturers across various disciplines. It is worthy to note that female participation is highly encouraged. Other members of the Team are: Dr. Akin Akintuyi (Department of Geography), Dr. Nsikan Obot (Department of Physics), Mrs Chika Ojiako (Department of Computer Sciences), Mr Yinusa Ahmed (Department of Mechanical Engineering) and Miss Oluwaseun Muraino (Department of Estate Management).

The French Ambassador, in his remarks, expressed the Embassy’s hope “that the UNILAG Fab Lab would become the open, beating heart of innovation in Lagos, providing both town and gown, citizens, researchers, engineers, and students with the right environment.” He informed the gathering that the University of Lagos is the first out of five Nigerian universities the Embassy intends to donate such a lab to.

The Ag. Vice-Chancellor, Professor Folasade T. Ogunsola, FAS, in her remarks during the inauguration of the Lab, averred that the Lab would further facilitate the innovation and entrepreneurship drive of the University. She appreciated the donors, as well as the team working on the project. She further remarked that the Lab would help students bring their ideas to reality and foster their collaboration with industries.

Just as Fab Labs are designed to provide access to the environment, skills, materials and advanced technology, allowing anyone anywhere to make (almost) anything, the UNILAG Fab Lab, situated at the Dr. Daniel K. Olukoya Central Research and Reference Laboratories, UNILAG, Akoka Campus, Lagos State, Nigeria, is open to all users to access equipment such as 3D Printers, CNCs, Creality CR-10 S, amongst others for fabrication, printing, mechanical and electronic works.