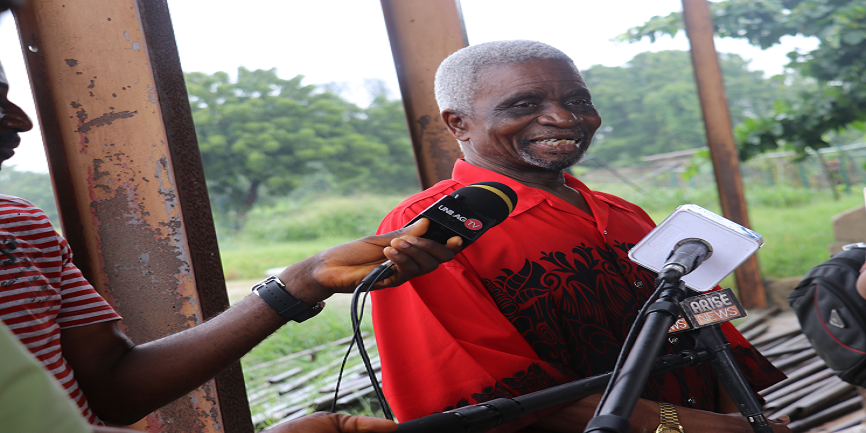 They came in their numbers, and they defied the rain – all for Professor Ade Kukoyi.

Professor Kukoyi clocked 80 on the 3rd of July and members of the UCA decided to celebrate the milestone with a commitment to invest in the massive upgrade of the cricket pitch and pavilion to international standards.

President of the UCA, Mr. Kwesi Sagoe, with much nostalgia, spoke of the immense work that Professor Kukoyi did to start and develop the game of cricket to enviable heights in the University of Lagos. He expressed delight that many of the “Kukoyi Boys”, as he called them, played both for the university and the national team, winning medals. “It is, therefore, our determination that cricket in UNILAG remains the sporting activity of first choice and never vanishes from the school’s extra-curricular activities”, he said.

For Mr Uyi Akpata, Vice President of the Nigerian Cricket Federation (NCF), Chairman of the Edo State Cricket Association and another one of the “Kukoyi Boys”, nothing could be more befitting for the celebration of Professor Kukoyi at 80 than to have his beloved UNILAG Cricket revamped and positioned for national and international exploits. He promised the support of the federation to that end.

It was a Turning-of-the-Sod ceremony and the Vice-Chancellor, Professor Oluwatoyin Ogundipe, FAS, was present to hand over the facility to the UCA Alumni. He showered praises both on the honoree and members of the UCA who deemed it fit to contribute to the development of sports in their Alma Mater. He took the opportunity to reel out the numerous achievements of UNILAG under his watch and expressed the hope that the facility would be ready in time for the hosting of the NUGA Games by the university. He thanked Professor Kukoyi for his path-finding efforts and wished him more years of significant service.

The octogenarian and celebrant expressed delight at the honour. He reminisced on the early days of cricket at UNILAG and the many triumphant moments he shared with his boys. He expressed delight at how “big they have grown now” to be able to come back for the revival of a sport that taught them many life principles. He expressed the hope that the facility, after being upgraded, would become the “ ‘Mecca of Cricket’ in Nigeria and an international sports academy”.

Professor Kukoyi retired from the University of Lagos in 2005 as a Professor of Romantic and Comparative Literature, Faculty of Arts. He was Nigeria’s first graduate of French, a former Wicketkeeper for the national cricket team and the coach who took the UNILAG Cricket Team to nine finals, winning 6 Gold and 3 Silver medals.