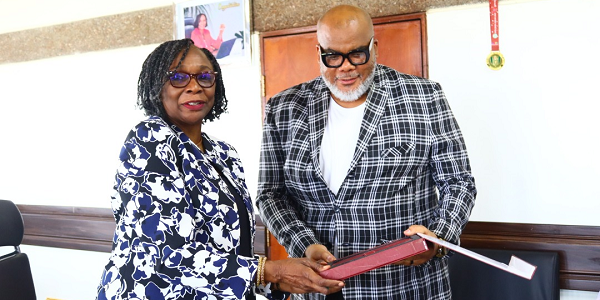 The Consul-General of South Africa in Lagos, Dr. Bobby Moroe, paid a courtesy visit to the Vice-Chancellor, Professor Folasade Ogunsola, FAS, at her office in the Senate House on Wednesday, November 16, 2022.

The South African top diplomat congratulated the Vice-Chancellor on her assumption of office and extended to her the best wishes of his country.

“I am delighted to be here, and more gratefully so, given that this meeting was facilitated at short notice. We congratulate you, Prof, on your assumption of office. It delights us to know that you are the first female occupier of the exalted seat. On account of that, we believe that UNILAG is in for a good time, because the mother in you will translate to how you manage the affairs of the institution”, he said.

The Consul-General highlighted the long-standing relationship between Nigeria and South Africa, and emphasised ways the African continent can leverage on that to engender a more inclusive development process.

“Nigeria and South Africa are the two giants of Africa. Our relationship is long-standing. In fact, by next year, we shall be celebrating the 29th Anniversary of diplomatic relations between both countries. Therefore, it is my duty to look for ways to expand the scope of the relationship between our countries; and I believe that our universities have important roles to play in that regard.”

In her response, the Vice-Chancellor expressed her delight at the visit of the Consul-General.

“What you have said, CG, sounds like music to my ears. As a University, we are big on internationalisation and pan-Africanism. As a continent of over a billion people, with a large percentage of that being youthful, Africa has immense powers that are not being harnessed – and that is so because we are fragmented.  At UNILAG, we believe that African universities can serve as launch pads for improved social cohesion on the continent, which will flow on to the actualisation of other possibilities.”

Professor Ogunsola harped on the need for African countries to open up more and work with each other, noting that it will provide the foundation for global competitiveness.

“We in Africa need to work together more closely, and accord to ourselves the same kind of respect we give to the Global North. That is how we can become a force to reckon with beyond the continent. There is so much work to be done, and we at UNILAG are happy to work with you”, she affirmed.

The South African Consul-General in Lagos was on campus as Keynote Speaker at a conference jointly organised by the Institute of African and Diaspora Studies (IADS) and GLOTAN Research Services.  The theme of the conference is “Russia-Ukraine Crisis and its Impact on Africa”.