“Seeing this here, I can say that THIS IS GOOD”- Dr. (Senator) Mamora Declares at Commissioning of NCEEC Administrative Building in UNILAG 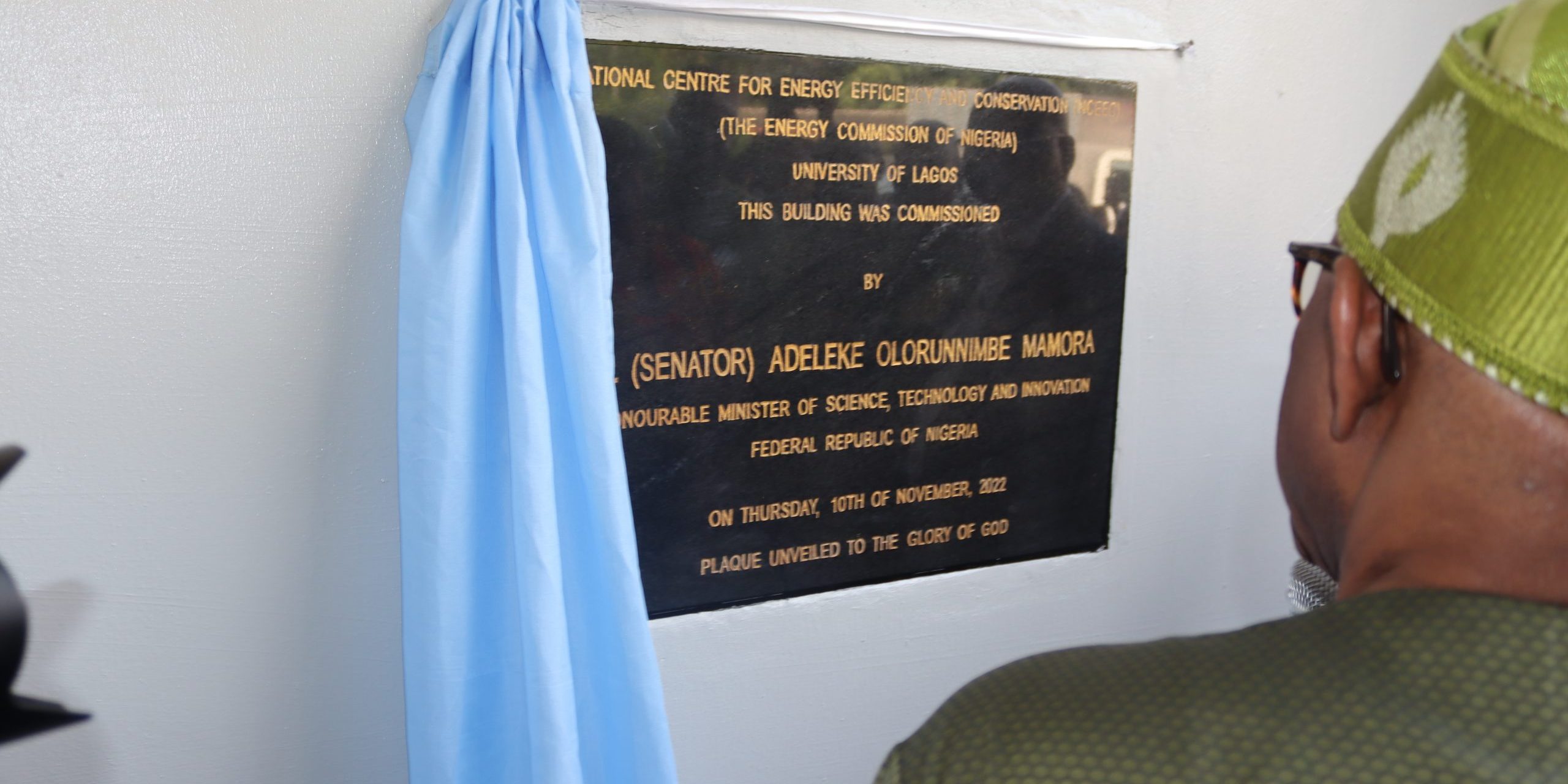 Those were the words of the Honourable Minister of Science, Technology and Innovation, Dr. (Senator) Adeleke Oloruninmbe Mamora at the Commissioning of the Administrative Building of the National Centre for Energy Efficiency and Conservation (NCEEC) at the University of Lagos on Thursday, November 10, 2022.

He stated that in a time when energy transition is one of the topical issues in the world – fossil to renewable energy, the commissioning of the NCEEC building was a celebration of one of the steps taken towards socio-economic development, asides technology advancement, in Nigeria. He noted that Energy efficiency and conservation as well as deployment of renewable energy are the pillars of the UN’s sustainable development goals of ensuring universal access to clean, reliable and modern energy by the world by year 2030. He commended ECN for the commitment and foresight shown in seeking approval for the establishment of the Centre, as well as locating it at the University of Lagos.

Dr. Mamora commended the University Management for the support to the Centre to make it a reality, and assured ECN of the Ministry’s continued support to achieve its mandate for adequate, affordable, reliable supply of clean energy in Nigeria.

The Acting Director of the Centre, Dr. Olawale Ajibola, in his speech, told a story of how the Centre came to be as well as recognised his predecessors – Prof. Oluwole Adegbenro, Prof. Abiola Kehinde and Dr. Emmanuel Ogedengbe who laid the great foundation on which he has built on. According to him, the Centre is set to dominate the energy efficiency space in Africa, continue to focus on research projects which will lead to high-grade publications in national and international journals, as well as entrench energy efficiency and conservation at every level of Nigeria’s energy value chain.

He stated that the decision to locate NCEEC IN Lagos is based on the fact that the state has the highest level of energy consumption as a result of its huge population, transportation systems, industries and commercial activities; and also, because UNILAG has the human capacity to support the Centre.

The Vice-Chancellor, Professor Oluwatoyin T. Ogundipe, appreciated Prof. Bala for the kind gesture of ensuring that the building was commissioned before his departure from the Office of the Vice-Chancellor. He thanked the Board of the Centre for providing all the necessary assistance required during the construction of the Building. He also thanked the Minister of Science, Technology and Innovation, Dr. (Senator) Mamora, present and past Directors of the Centre, and everyone present at the commissioning.

Afterwards, the Building was officially commissioned by the Minister and a tour of the facility conducted by Dr. Ajibola.

Earlier, Dr. (Senator) Mamora, Prof. Bala and their teams paid a courtesy visit to the Vice-Chancellor’s on the 11th floor of the Senate House, where they were received by the Deputy Vice-Chancellor, Development Services, Prof. Ayodele Atsenuwa and other members of the University Management.

The National Centre for Energy Efficiency and Conservation building, is a three-storey building, located on Oduduwa drive, opposite Engineering Workshop, Faculty of Engineering (beside the D. K. Olukoya Research Laboratories), University of Lagos.