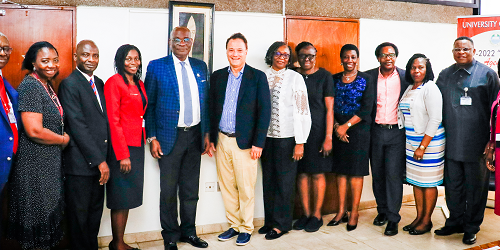 The Vice Chancellor, University of Lagos, Professor Oluwatoyin T. Ogundipe, FAS has emphasized the role of tertiary institutions as beacons of light in the quest for sustainable national development.

Professor Ogundipe made this assertion during a courtesy visit by the Public Affairs Officer of the United States of America Consulate General, Mr. Joseph Kruzich, to his 11th Floor, Senate House Office on Tuesday, November 8, 2022.

While welcoming Mr. Kruzich who was accompanied by Mr. Clemson Ayegbusi, the Vice-Chancellor restated the University’s commitment to demand-driven research works that would provide direction for developmental efforts.

He showcased the many feats achieved by UNILAG, particularly in the areas of promotion of student entrepreneurship and innovation. According to him, “over 68 businesses of UNILAG students have already been registered with the Corporate Affairs Commission as the target is to ensure registration of companies for student-entrepreneurs with no strings attached”.

While highlighting the success stories of the University including the adoption of secondary schools within the varsity’s host communities, Professor Ogundipe stressed that community impact is a core mandate of the University.

In response, Mr. Kruzich explained that the courtesy call was in fulfillment of his earlier promise to the Vice-Chancellor that he would visit the University before the end of his tenure. He appreciated the University management team for the rousing reception accorded him, and their support of the Fullbright Programme.

Mr. Kruzich assured of his commitment to expanding and strengthening bilateral relationship between the University and relevant American institutions particularly in the area of research and funding of students’ entrepreneurship and innovation drive.

The courtesy visit came to a close with group photographs and presentation of a token of goodwill by the Vice-Chancellor to Mr. Kruzich.