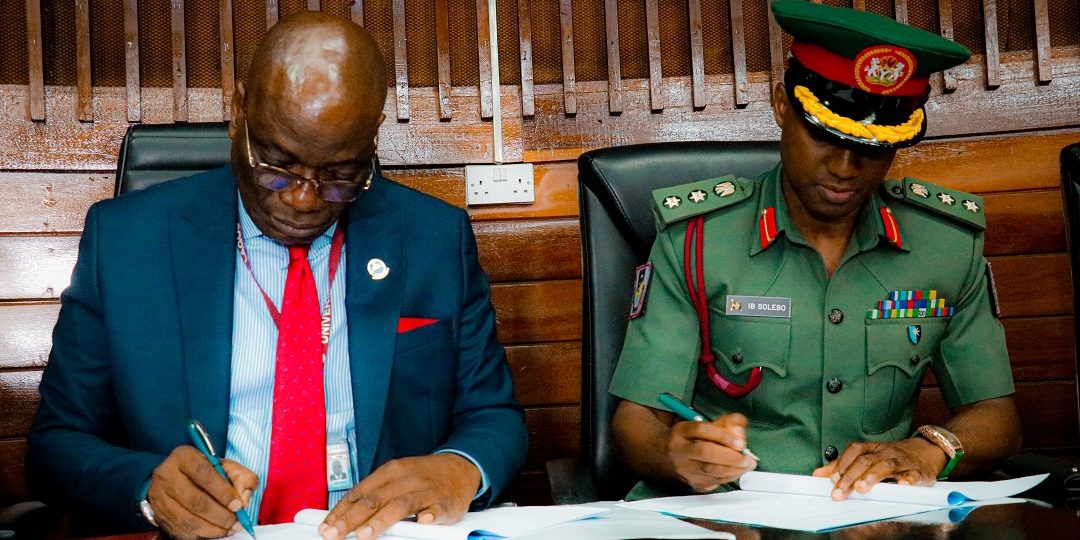 The Management of the University of Lagos led by the Vice Chancellor, Professor Oluwatoyin Ogundipe, FAS, has signed a Memorandum of Understanding (MOU) with the Nigerian Army College of Nursing, Myhoung Barracks, Yaba.

The signing ceremony was held on Monday, October 17, 2022 at the Senate Chamber, Senate House UNILAG, Akoka.

The MoU was signed by the management of the University of Lagos and representatives of the Nigerian Army. In his remarks at the event, the Vice Chancellor, Professor, Oluwatoyin Ogundipe, FAS explained that the signing of the MoU was the culmination of three-year discussions.

He described the development as a remarkable narrative, opening a new chapter in the bilateral relationship between UNILAG and the Nigerian Army. In his words, this symbiotic relationship is a great one for Nigeria.

In his response, the Corps Commander, Nigerian Army Medical Corp, Colonel I.B Solebo, acknowledged that the University of Lagos is the best University in Nigeria.

According to him, “it is a remarkable story that the collaboration between the University of Lagos and the Nigerian Army Nursing School has the approval of the highest authority of the Nigerian Army. This institutional marriage will produce productive development of the best nursing training in the nation’s Institution of higher learning.”

At the end of the event, the two teams exchanged goodwill gifts, including plaques of honour, presented to the outgoing and incoming Vice Chancellors of the University of Lagos, Professor Oluwatoyin Ogundipe FAS and Professor Folasade Ogunsola by the military personnel.