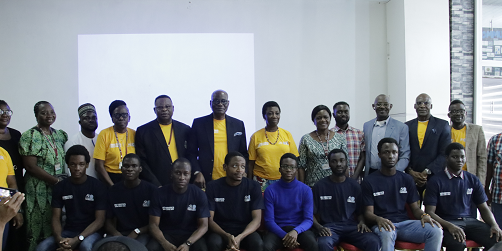 Friday, August 26, 2022 was yet another day for the celebration of innovative ideas at the Artificial Intelligence and Robotics Laboratory (AIROL) of the University of Lagos.

It was an opportunity for young, innovative, and tech-oriented students to showcase the knowledge acquired at the laboratory.

The students had competed in various challenges including a three-month Robotics Challenge. Two teams of eight students: Team Disrupt-IV and Team Innovative competed in the challenge.

With their BINBOT, a robot that traverses a designated location to pick up trash, Team Disrupt-IV emerged winner and was rewarded with a cash prize of One Hundred and Twenty-Five thousand naira (N125,000). Team Innovative came second with their Biometric Fingerprint Attendance System, which was designed to address the challenge of absenteeism in academic and work environments. They were rewarded with Seventy-Five Thousand naira (N75,000).

The two teams were assessed on the parameters of quality of presentation, originality of idea, social and environmental impact of the idea, and its commercial viability.

The Chairman of Coderina’s Board of Trustees, Mr. Femi Niyi congratulated the robotics laboratory for its gradual emergence as a production pipeline of home-grown tech geniuses, and re-affirmed his company’s continued support for the laboratory’s activities.

He challenged the two teams to use their cash gifts to further develop their prototypes, to attract more funding.

In his remarks at the occasion which also doubled as the Closing Ceremony of the AIROL Summer Coding and Robotics Programme, 2022, the Vice-Chancellor, Professor Oluwatoyin Ogundipe, FAS applauded the passion of the Lead and Principal Investigator of AIROL, Dr. Chika Yinka-Banjo for the propagation of the knowledge of robotics among young people.

He commended the students for their diligence at learning, and encouraged them to use their knowledge to bring solutions to their immediate communities.

The one-month summer programme trained participants between the ages of 8 and 16 in the basics of coding and robotics. It also exposed the young participants to software applications which they deployed in the creation of different projects.

The young developers were taught to code with the Scratch programming language, which they used to develop games and animation videos.

The University of Lagos Artificial Intelligence and Robotics Laboratory was established in 2018 following a doctoral grant won by Dr. Chika Yinka-Banjo. It scouts for and trains youngsters in artificial intelligence and robotics as a way of giving back to the community, and preparing the young ones for an empowered future.

One of the stand-out projects displayed at the event was an Automated Dustbin, developed by Adekunle Abdulazeez, an SS3 student of the International School, University of Lagos and Timilehin Egbetokun, a 300 Level Computer Engineering student of Ajayi Crowther University.  The dustbin is powered by a sensor which opens it automatically whenever a user approaches it to thrash waste, and closes by it itself when the user walks away. That way, there is no physical contact between the user and the bin.