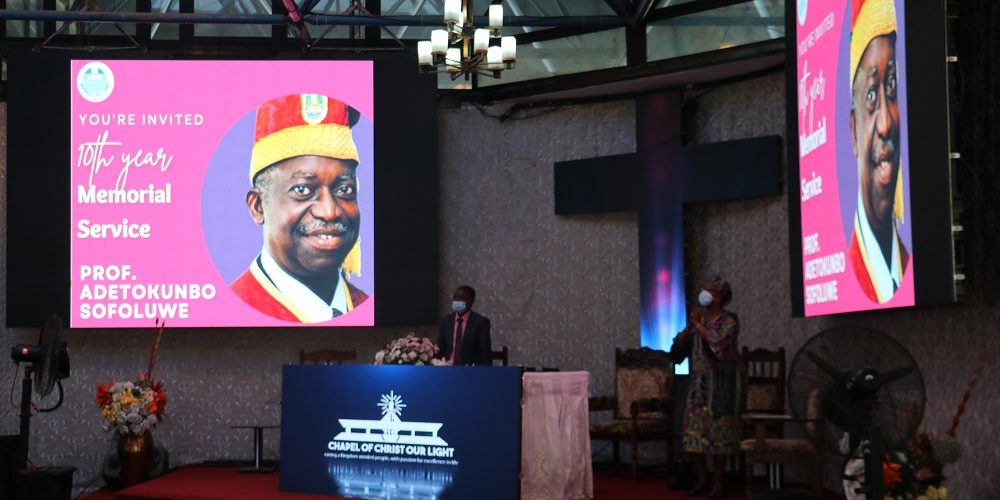 On Wednesday, May 11, 2022, family, friends and members of the University of Lagos community gathered to pay their respects to the memory of the passing of the 10th Vice-Chancellor, University of Lagos, Late Professor Babatunde Adetokunbo Sofoluwe.

The Memorial Service, which was held at the Chapel of Christ Our Light (Protestant), University of Lagos, Nigeria, marked the 10th posthumous anniversary of the astute professor of Computer Science, who was called to glory on Friday, May 11, 2012.

At the service, all present both physically and virtually were advised to focus more on accumulating eternal treasures, as earthly pursuits are limited by time and therefore terminates at death. In view of this, all were enjoined to pay forward for the type of afterlife they desire with how they lived here on earth. The Bible verses: “But lay up for yourselves treasures in heaven, where neither moth nor rust doth corrupt, and where thieves do not break through nor steal. For where your treasure is, there will your heart be also… For what is a man profited, if he shall gain the whole world, and lose his own soul? or what shall a man give in exchange for his soul?” ~ Matthew 6:20-21, 16:26 (KJV), were referenced to emphasize the message.

Looking back on the life and times of Professor Sofoluwe, inferences were drawn from how he helped several people in both the academia and various other fields to attain greater heights.

The Vice-Chancellor, University of Lagos, Professor Oluwatoyin T. Ogundipe, FAS, on behalf of Management appreciated the family and friends of Late Professor Babatunde Adetokunbo Sofoluwe, as well as the entire University community for coming out to celebrate the iconic Professor Sofoluwe. He invited the Old Boys of CMS Grammar School present to sing the school anthem in honour of Late Professor Babatunde Adetokunbo Sofoluwe, a rendition which was enthusiastically delivered and followed by rounds of applause.

May the soul of Professor Babatunde Adetokunbo Sofoluwe and souls of all the faithful departed, through the mercy of God, rest in peace. Amen.

Management and Friends Celebrate Professor Ogundipe at 62
May 31, 2022