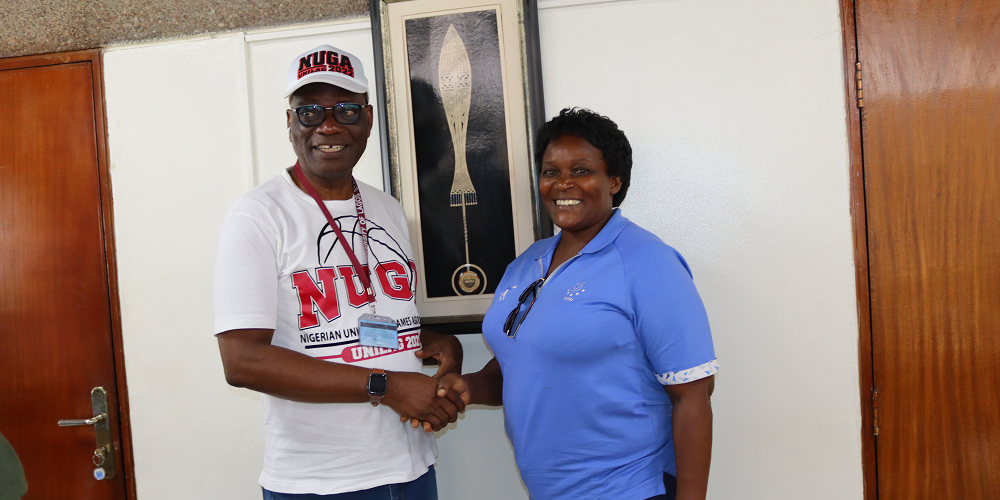 Secretary-General of the Federation of Africa University Sports (FASU), Dr. Peninnah Kabenge Aligawesa, paid a courtesy call on the Vice-Chancellor, today, Friday, March 25, 2022 at his office on the 11th floor of the Senate House.

The 3rd Vice-President of the International University Sports Federation (FISU), who came all the way from Makerere University, Uganda, was full of praise for the University of Lagos for what she described as an “excellent hosting of the NUGA Games”.

“I am impressed with the facilities that I have seen. The Swimming Pool is truly of Olympic standard, and so are the ball game courts. UNILAG has the facilities to host a continental inter-university sports event, and I really look forward to that time when FASU Games will be hosted here.”, she said.

The Vice-Chancellor, Professor Oluwatoyin Ogundipe, FAS, thanked the FASU representative for her kind words. He reiterated his belief in doing well anything that has to be done, and how that orientation has influenced the approach of UNILAG to undertaking the NUGA-UNILAG project.

“When we came into office, we deployed a P3P Strategy, which has helped us to meet the infrastructural needs of the university and close the gap very quickly. We have been able to do this very efficiently, because we leveraged on our university’s asset base in people. The P3P stands for Pick a Person, Pick a Project, Pick a Person”, the Vice-Chancellor said.

He welcomed the compliments paid to the institution’s sporting facilities, and declared the readiness of UNILAG to host the continent whenever the opportunity presents itself.

Also present at the meeting was the NUGA President, Professor Stephen Hamafyelto, who has been on ground since the commencement of the NUGA Games.

The Federation of Africa University Games (FASU) is the governing body of university sports in Africa. It was founded in 1971 by 10 African countries to improve the development of sports in African universities.