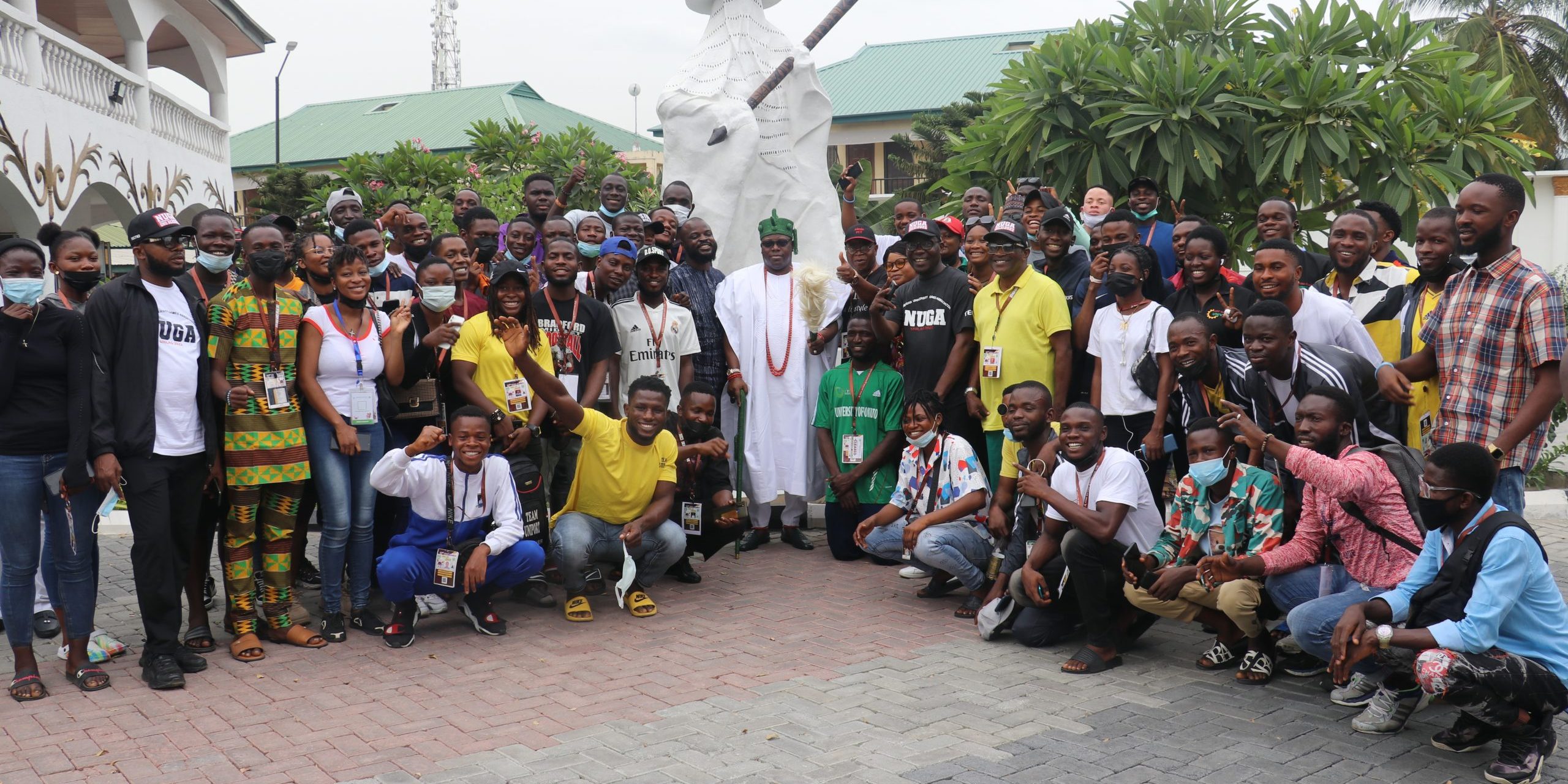 As part of activities earmarked to accord contingents at the 26th Nigerian University Games (NUGA) a feel of Lagos culture, selected athletes across participating universities were guests of the Oniru of Iru land, Lagos, Oba Abdulwasiu Omogbolahan Lawal, Abisogun II.

Their visit to the Onirun’s palace on Thursday, March 24, 2022, according to the Executive Secretary, UNILAG NUGA Games 2022, Dr. Joseph Awoyinfa, was also aimed at deepening the knowledge of participants on some cultural and monumental legacies of Lagos state on the side line of sporting activities which brought them to Lagos.

In his remarks, Project Lead of the #NUGAUNILAG2022, Mr. Idris Olorunnimbe recalled and acknowledged the warm disposition and support of the monarch for the 2022 NUGA Games being hosted by the University of Lagos.

While appreciating the royal blessings and financial support which the Oniru gave towards #NUGAUNILAG2022 when the UNILAG management, led by the Vice-Chancellor, University of Lagos, Professor Oluwatoyin Ogundipe, FAS, presented the NUGA Unity Torch to him in his palace, Mr Olorunnimbe noted that the colourful opening ceremony of the biennial sports fiesta and the successes so far recorded are track records which would be difficult to beat in years ahead.

Addressing the NUGA delegation which also had on board, former broadcaster, ex-commissioner and the incumbent Chairman, Board of Directors, Kwara State Television Authority, Mr. Hamid Adio, the Oniru of Iru land, Oba Abdulwasiu Omogbolahan Lawal, Abisogun II again congratulated the University of Lagos on the successes so far recording at the 2022 NUGA Games.

The royal father who re-emphasized his preference for football among other sporting activities during his years as a student of the University of Port Harcourt commended the competitive spirit among all participants, a mindset which he admonished all and sundry to cultivate, rather than a do or die spirit which according to him, breeds unhealthy rivalry and prevents harmony.

Oba Abdulwasiu Lawal spoke glowingly on the benefits of the NUGA Games, particularly its capacity to serve as a tool for all round integration among Nigeria’s teeming youthful population.

In their responses, the NUGA athletes were full of gratitude to the Royal father for the warm reception into his palace and his royal blessings, they were equally grateful to the management of the University of Lagos for facilitating their visit to the Oniru’s palace, describing their experience as one which they would keep relishing even after the NUGA Games.

Other highlights of the visit to the palace of the Oniru were prayers for the contingents by one of the White Cap Chiefs of Iru land.

The entire delegation thereafter moved to the Oniru Beach where they were accorded a facility tower while they also savoured the aquatic splendour.

The excursion of the NUGA contingent was rounded up at the Ogidi studios of the Temple Management Company Limited situated at Lekki area on the Lagos Island where they were also accorded a facility tour.