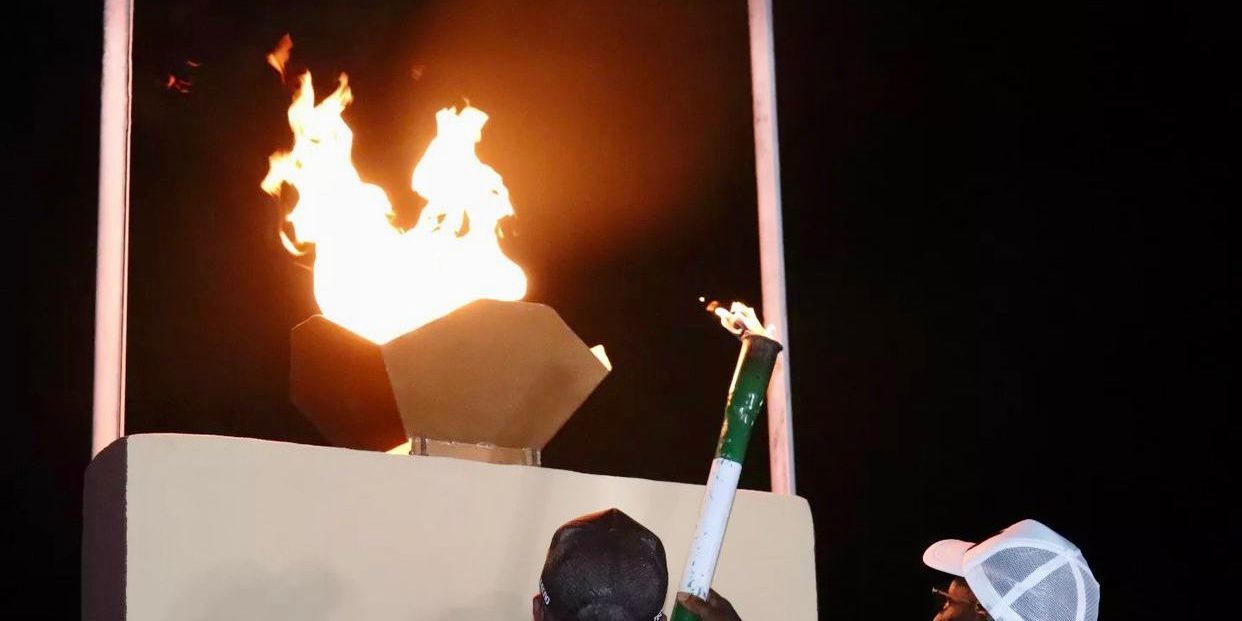 Campus of the University of Lagos was filled with pump and ceremony as the Speaker, House of Representatives, Honourable Femi Gbajabiamila lit the main torch which signifies the formal kick-off of tournaments for the 26th Nigerian University Games (NUGA) being hosted by the institution.

The lighting of the NUGA main torch which was sited at the flag station of the UNILAG Sports Complex, was the highpoint of the opening ceremony which held till late hours on Saturday, March 19, 2022 amidst glitz and glamour.

The UNILAG Sports Complex was the place to be for the several hours that the ceremony lasted as an array of personalities from all walks of life including dignitaries from the corporate world, Vice-Chancellors of other universities and political stalwarts turned up in their numbers to identify with the management, staff and students of the University of Lagos led by the Vice-Chancellor, Professor Oluwatoyin Ogundipe, FAS, as UNILAG hosts NUGA.

Speaking shortly before performing the formal lighting of the main NUGA torch, Honourable Gbajabiamila who graduated from the Faculty of Law, UNILAG in 1983 again congratulated his alma mater for winning the hosting right for the University Sports for the fourth time just as he appreciated all other participating universities.

While recalling his fond memories as a UNILAG student, the Lawmaker identified competitions such as NUGA as a melting pot for youths through which national integration for greater exploits and accomplishment, could be achieved irrespective of colour, social, ethnic, religious or political leaning.

Earlier in his remarks, Nigeria’s Minister for Youths and Sports Development, Mr Sunday Dare identified NUGA as the second largest convergence of youths in Nigeria after the National Youth Service Corps (NYSC) Scheme.

Mr Dare who had earlier lit the NUGA Unity torch on Friday, November 26, 2021 to flag off preparation for the Games assured that the weeklong event will serve as a build-up to the World University Games slated to hold later in June as well as the Commonwealth Games slated for July.

Prof. Ogundipe affirmed that by hosting the 26th NUGA games, UNILAG has raised the bar and added more value to the Nigerian University Games.

Other Speakers at the event which was graced by the Deputy Governor of Ogun State, Mrs. Noimot Salako-Oyedele, and the representative of the Lagos State Governor, Mr Sola Aiyepeku among many others, were the NUGA President, Professor Stephen Hamafyelto and the Group Chief Executive of GTCO; Mr Segun Agbaje. They charged athletes to compete fairly, play by the rules and make the very best of their stay on the UNILAG campus.

Highlights of the ceremony included; calisthenics by pupils of UNILAG Staff School and UNILAG students, march past by all participating universities, fireworks, feature performances by renowned Nigerian hip-hop artistes namely Pheelz, 9ice alongside other artistes on the #NUGAUNILAG2022 theme song among several other fun activities which kept the mood of the audience who converged for the colourful event awe-struck and carnival-like for several hours.

At the close of registration and accreditation, 75 universities had registered for participation in the #NUGAUNILAG2022 games with over 6,000 athletes and officials.

The 26th NUGA Games will climax on Saturday, March 26, 2022 with a closing ceremony.

Press the play button below to watch the livestream.