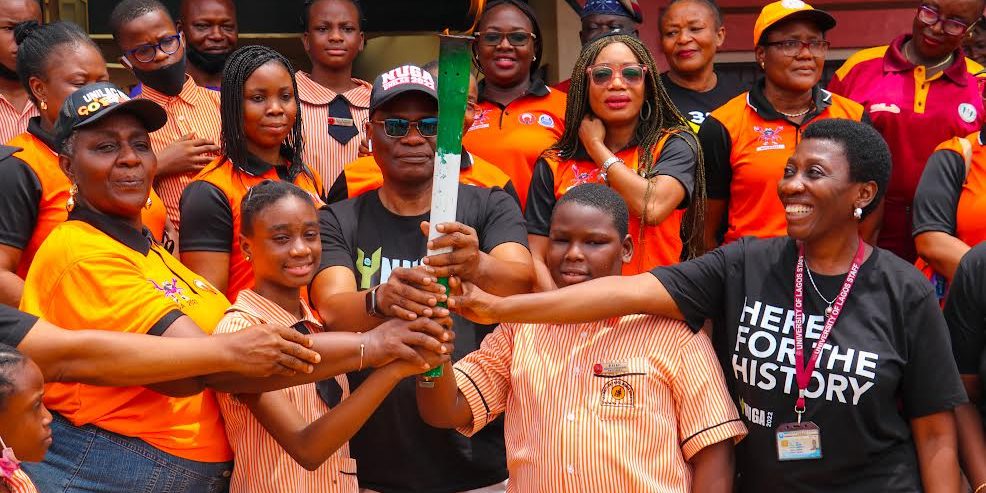 The NUGA Torch of Unity made its way to the University of Lagos Women Society (ULWS) Nursery and Primary School where it was presented to the pupils by the UNILAG NUGA student ambassadors on Friday, March 11, 2022.

As young chaps who will host in the Games, God-willing, in the future, the University Management decided to present the torch to the pupils as a way of sharing its excitement at hosting the NUGA Games. The President of the Society, and wife of the Vice-Chancellor, Mrs. Oluwaseun Ogundipe, welcomed everyone to the school and expressed excitement at the Torch of Unity coming to the school. She thanked Management and NUGA Secretariat for the opportunity and wished the University of Lagos successful Games.

The Deputy Vice-Chancellor, Development Services, Prof. Ayodele Atsenuwa encouraged the pupils to spread the word about the forthcoming NUGA Games. She noted that some of them will get to participate in the Games and become heads of companies and corporations which could support it in the future.  She encouraged the teachers to appeal to parents to allow their children/wards watch the Games, especially the opening and closing ceremonies as they would be filled with fireworks and all the razzmatazz.