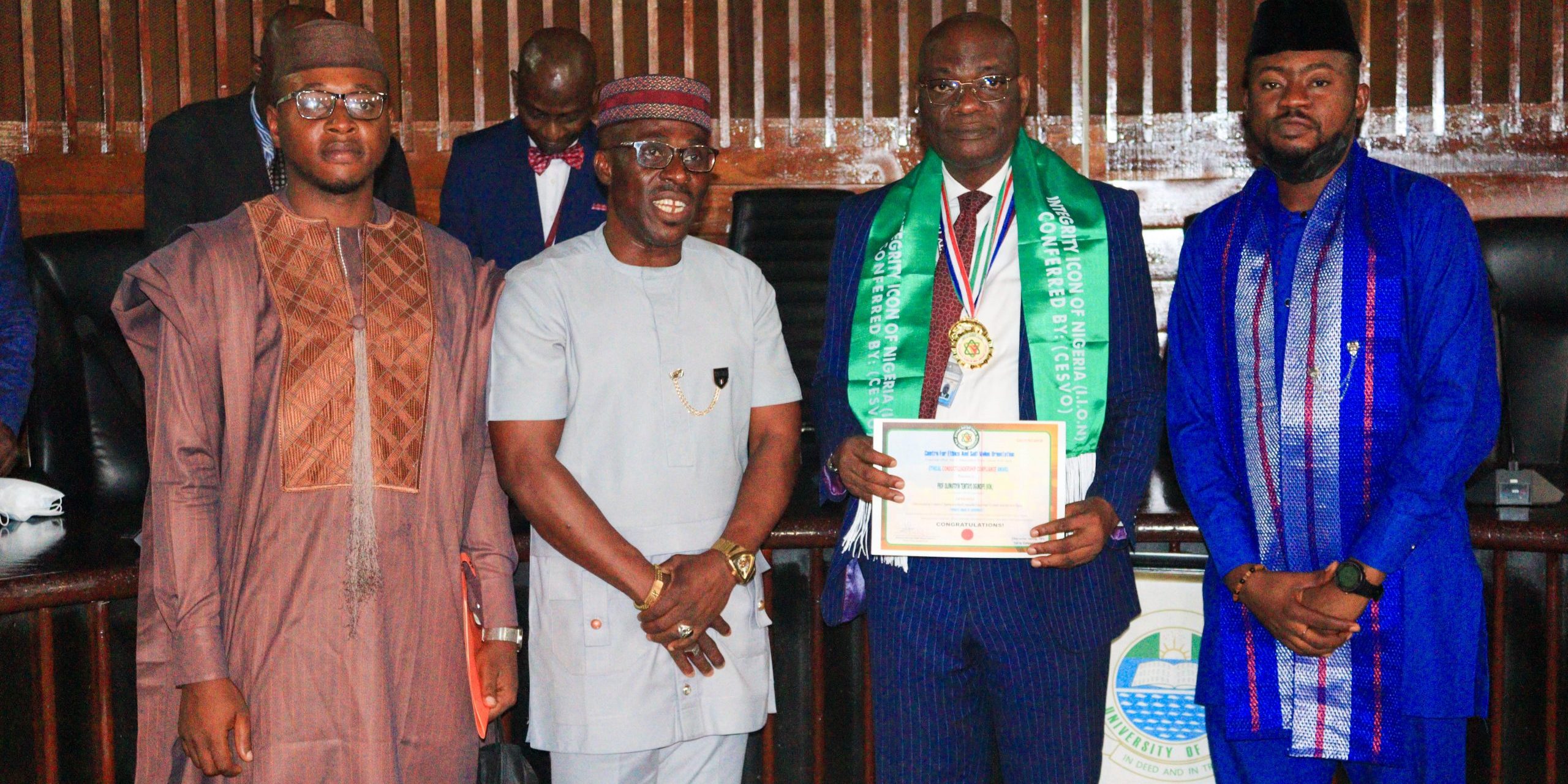 The University of Lagos was on Monday; February 14, 2022 conferred with a Corporate Certificate of Credence as “Least Corrupt Federal University in Nigeria”.

The award is courtesy of a Lokoja based Non-Governmental Organization (NGO), Centre for Ethics and Self Value Orientation (CESVO) which focuses on exposing corruption.

The award presentation ceremony which held at the Senate Chamber of the University of Lagos also saw the Vice-Chancellor; Professor Oluwatoyin Ogundipe, FAS, bagging an award in Ethical Conduct and Leadership Compliance.

Speaking shortly before decorating the Vice-Chancellor with the medals for both awards, Executive Director, Centre for Ethics and Self Value Orientation; Prince Salih Musa Yakubu outlined thematic areas of the Corporate Certificate of Credence as the Least Corrupt Federal University in Nigeria given to UNILAG to include; SERVICOM compliance, Innovative and transparent leadership, Staff/Student discipline and welfare, due process application, office attendance, public accessibility, fiscal discipline measures, curtailment of internal corruption, examination ethics compliance, admission integrity and participatory management among others.

Prince Yakubu noted that the Vice-Chancellor bagged his award in Ethical Conduct and Leadership Compliance based on his assessment in; self-discipline, emotional intelligence, time management skills, corporate policy performance, ethical uprightness in work place, past antecedence, fiscal discipline and dedication to public service among other thematic areas.

The University of Lagos, according to Prince Yakubu, pulled the highest point of 79% thereby defeating 79 other federal universities across Nigeria in a 16-month covert investigation by the centre to win its award while Professor Oluwatoyin Ogundipe, FAS, garnered 76% to clinch his award which also confers on him, the highest Honorific title of the Centre for Ethics and Self Value Orientation (CESVO) which is Integrity Icon of Nigeria (I.I.O.N).

As a reward for the awards won by both the University and the Vice-Chancellor, the CESVO boss announced an offer of retreat in Ethical Leadership for 200 members of the UNILAG community comprising 100 staff members and 100 student leaders. He said the retreat comes at 70% liability to the Centre for Ethics and Self Value Orientation while the University caters for 30%.

In his response, the Vice-Chancellor, University of Lagos; Professor Oluwatoyin Ogundipe, FAS, was full of gratitude to the Centre for Ethics and Self Value Orientation for the honour.

He adjudged the awards conferred on him, the University and other members of staff as feats which further dispels all misinformation about the university.

While ascribing the awards to the collective efforts of all staff of the University, Professor Ogundipe assured that it will further spur the institution’s management towards the sustenance of finest standards expected of a university of first choice and the nation’s pride which UNILAG prides itself as.