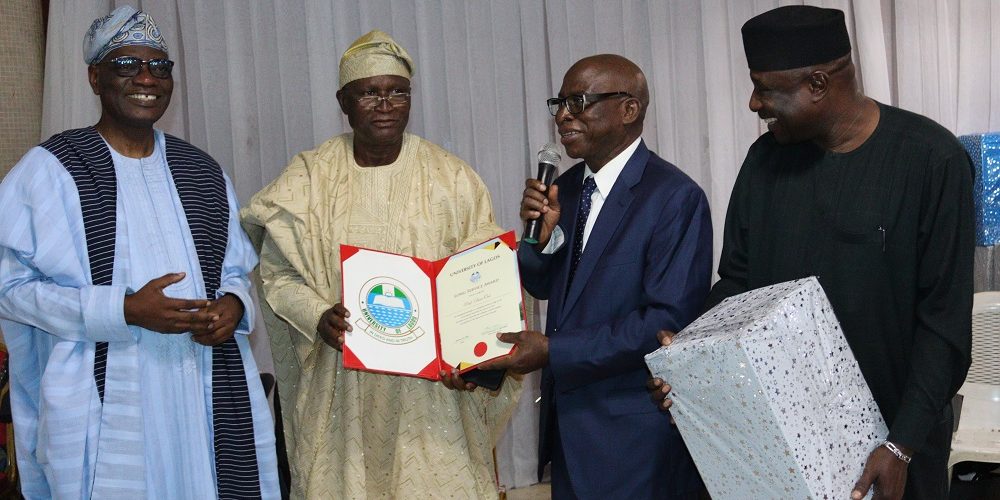 Colourful, convivial, and ceremonious. Those are the words best fitting to describe the atmosphere of the Senate Lounge venue of the Long Service Gala organised for teaching and non-teaching staff who are set to retire from active engagement after many decades of meritorious service to the University of Lagos.

The event kicked off with a Welcome Address from the Deputy Vice-Chancellor (Development Services), Professor Ayodele Atsenuwa.

Thereafter, a Keynote Address was delivered by the Vice-Chancellor, Professor Oluwatoyin Ogundipe, FAS, who reiterated his belief in institutional loyalty. He reaffirmed his conviction that people who serve the university well should be recognised, rewarded, and adorned.  He also described the occasion as an instructive and inspiring one for the younger ones who are still in the system to note that their diligent service to the University of Lagos will also not go unnoticed nor uncelebrated.

Joint Chairman of the event, Distinguished Professor Ayo Ogunye, congratulated the retirees and thanked them for their diligent labour for the advancement of the University of Lagos. He enjoined them never to forget UNILAG after retirement, but to continue to seek ways to promote her good cause.

Former Deputy Vice-Chancellor (Management Services), Professor Duro Oni, gave the Vote of Thanks on behalf of the honourees. He expressed gratitude for the opportunity to have been a part of building the international education brand that UNILAG has become. He also encouraged the people still active in the system to take a cue from them and work for the greater uplift of the “the University of First Choice and the Nation’s Pride”. He was particularly celebrated for being the Longest Serving member of staff in the history of the university, having spent 45 years of full-time service plus 1 year of National Youth Service.

There was plenty to eat and drink for everyone, and so was there ample time to merry and rejoice

Professor Rahamon Bello, the 11th Vice-Chancellor, and his celebrated mentor, Professor Ayo Ogunye, were joint Chairmen of the event.