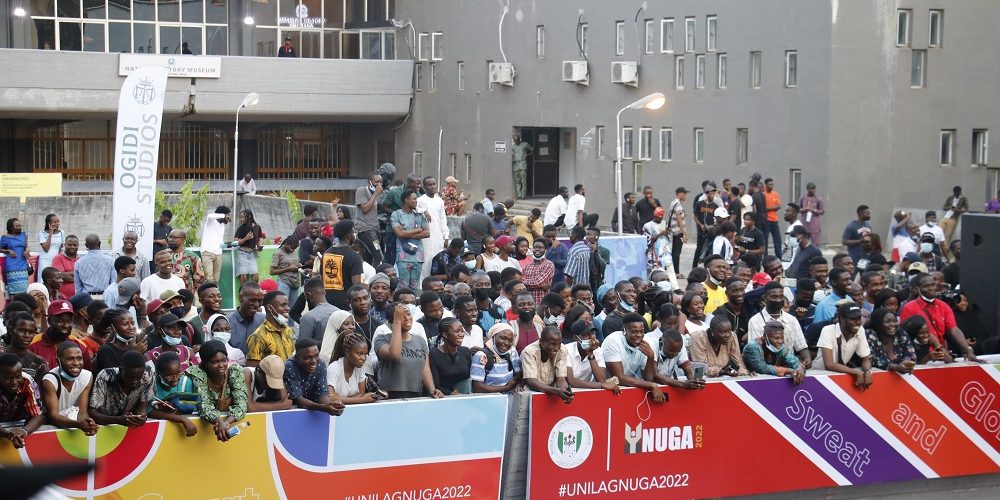 The University of Lagos was in frenzy for several hours on Friday, November 26, 2021 as Nigeria’s Minister for Youth and Sports Development, Mr Sunday Dare, lit the Torch of Unity for the 2022 Nigerian University Games Association (NUGA) being hosted by the university.

The lighting of the unity torch as performed by the Minister at an open-door ceremony which held at the J.F. Ade Ajayi Auditorium, marks the official flag off of activities for the UNILAG NUGA Games slated to hold between March 16and 26, 2022.

Speaking shortly before performing the official lighting of the 26th NUGA torch, Mr Sunday Dare congratulated the management, staff and students of UNILAG for accepting and bracing up to the challenge of bidding for and eventually defeating the University of Jos to win the NUGA hosting right for the fourth time, a feat which he said seals the place of UNILAG as a University of first choice and the nation’s pride.

The Minister assured that all the 38 sporting federations across Nigeria have been mandated to closely monitor the 2022 UNILAG-NUGA Games with a view to discovering and harvesting sports talents who will be trained and presented on bigger sports platforms.

The Sports Minister had earlier paid a courtesy visit to the Vice-Chancellor, Prof. Oluwatoyin Ogundipe, FAS, in his office where he commended the University for collaborating with the Joint Admissions and Matriculations Board (JAMB) with a view to ascertaining the studentship of all participants.

While reaffirming his ministry’s strong stance against all forms of cheating in sports, Mr. Sunday Dare assured that the Federal Ministry of Sports and Youth Development has successfully secured a collaborative arrangement with the National Identity Management Commission (NIMC) in confirming and screening details of NUGA Athletes as from the next NUGA games.

In separate remarks at the formal flag off ceremony, the Pro-Chancellor and Chairman of Governing Council, University of Lagos, Distinguished Senator (Dr) Lanre Tejuoso and the Vice-Chancellor, Professor Oluwatoyin Ogundipe appreciated the goodwill, support and cooperation so far received from all stakeholders especially alumni, friends and supporters of UNILAG.

While appreciating efforts and expertise of the Project Lead for the UNILAG-NUGA 2022, Mr. Idris Olorunnimbe which brought about the glamourous outing at the flag-off ceremony, the Pro-Chancellor and the Vice-Chancellor reassured that the UNILAG-NUGA games being the 26th in its history, will be the best NUGA games ever staged.

Executive Secretary, UNILAG NUGA Local Organising Committee, Dr Joseph Awoyinfa, in his welcome address, took the gathering down memory lane to 1968, 1978 and 1998 when the University of Lagos won the NUGA hosting rights respectively.

According to him, every detail is being attended to from security to facilities, welfare, medicals, accommodation for athletes among other requirements to ensure a successful UNILAG-NUGA come March 2022.

The presence of ace music producer and Mavin Record Boss; Michael Collins popularly known as Don Jazzy, Nigerian Artiste, Bisola Aiyeola better known as Bisola BBNaija and a host of others in the Nigerian music industry who worked on the theme song for the UNILAG-NUGA 2022 titled; Champion, kept the mood of the audience who converged for the flag-off event awe-struck and carnival-like.

Other highlights of the well-attended event which kept the UNILAG campus lively till later in the night were; unveiling of the UNILAG-NUGA 2022 mascot known as KADDI, remarks from former UNILAG athletes and medallists among whom is Nigeria’s first Olympic gold medallist, ACP (Assistant Commissioner of Police) Chioma Ajunwa, formal launching of the UNILAG-NUGA 2022 theme song, stage performance by Nigerian comedian, Bashiru Adekunle better known as Bash among several other fun-filled activities.