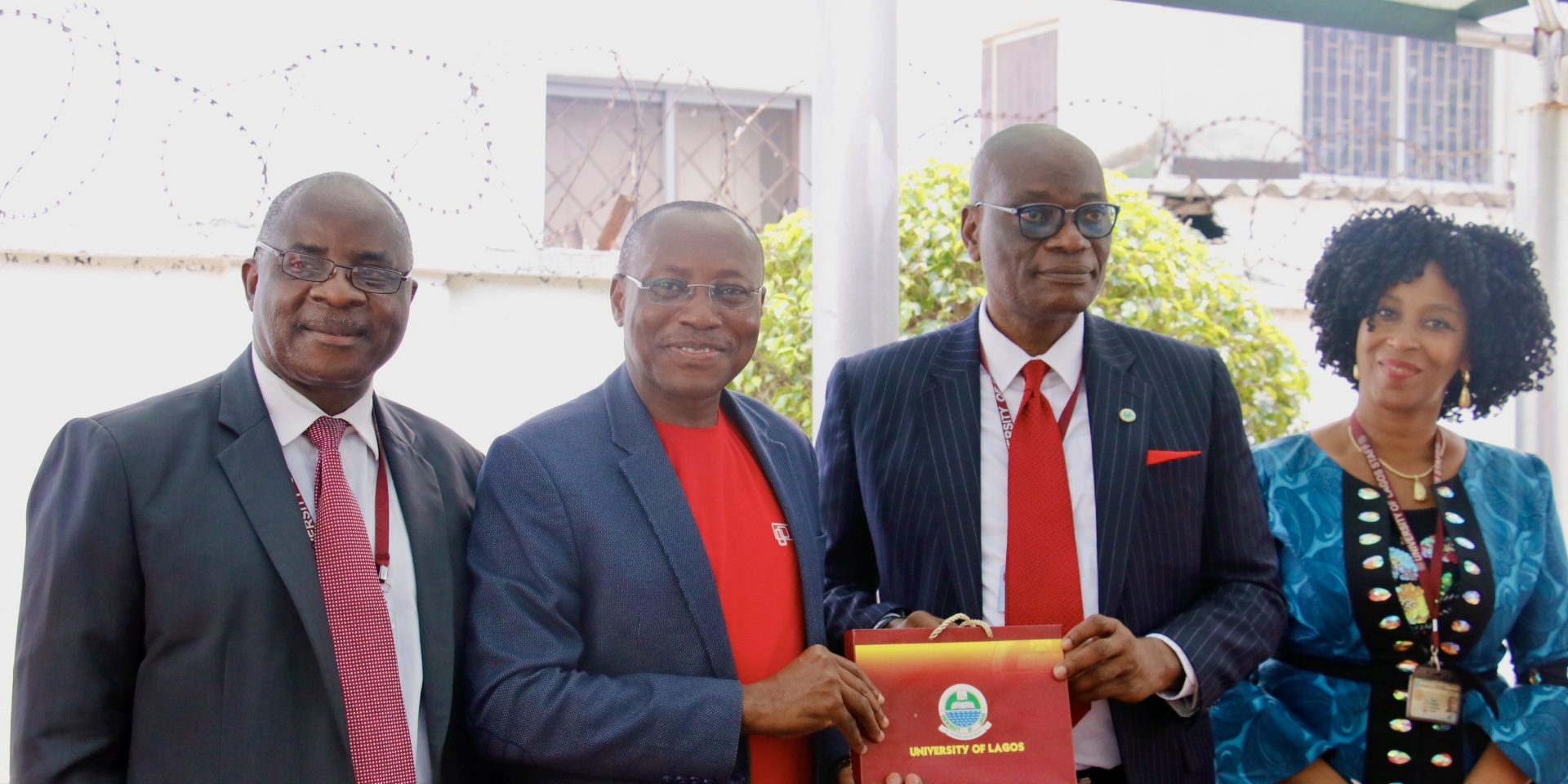 The P3P Strategy initiative of the Professor Oluwatoyin Ogundipe led management of the University of Lagos received further boosts on Friday, November 26, 2021 with the pledge and launch of a 3-by-3 programme courtesy of the Group Chief Executive Officer of Algorithm Media Limited, Otunba Seni Adetu.

The 3-by-3 programme, according to Otunba Adetu means automatic employment offers for the three (3) best graduating students of the Mass Communication Department of the University of Lagos over the next three academic sessions.

The pledge marks the high point of discussions during a courtesy visit by the Vice-Chancellor, Professor Oluwatoyin Ogundipe and some principal officers of the university to the head office of Algorithm Media Limited in Victoria Island, Lagos.

While receiving the UNILAG delegation in his office, Otunba Adetu who is an alumnus of the University took time to pay glowing tributes to successive managements of UNILAG for the purposeful leadership over the decades, a feat which he said has continually impacted graduates positively.

The 1985 graduate of Chemical Engineering recalled several of his top-level engagements especially outside Nigeria, noting that his sojourn in UNILAG equipped and prepared him for the global stage.

While assuring of his conglomerate’s readiness to deploy its expertise to support the University of Lagos in all areas of prospective collaboration, Otunba Adetu reaffirmed his advocacy for intensive industrial exposure for students of tertiary learning with a view to giving them a competitive edge, improving their contemporary relevance and brightening their chances in the corporate world.

In his remarks, Prof. Oluwatoyin Ogundipe, FAS, commended the management of Algorithm Media for identifying with the giant strides of the University of Lagos.

While appreciating the CEO, Otunba Seni Adetu for his positive disposition and gestures towards his alma mater, Prof. Ogundipe who solicited the support and expertise of the media establishment as UNILAG hosts the 2022 NUGA games noted that his management has been keen on improving the visibility of the university as well as promoting innovation and entrepreneurial skill development among the student population, a strategy which he said has also yielded monumental success in the annals of the University of Lagos.

The Vice-Chancellor recalled with nostalgia, the recently concluded UNILAG Business Innovation and Talent Expression (UNILAG BITE 1.0) where the three best businesses won the sums of two million naira (N2,000,000.00), one million, five hundred thousand naira (N1,500,000.00) and seven hundred and fifty thousand naira (N750,000) respectively. He added that no fewer than 10 businesses pitched at the event are to be registered and if need be, supported with seed loans of not more than N2,000,000.00 (two million naira).

The UNILAG delegation was conducted on a tour of the Algorithm Media Limited after which Prof. Oluwatoyin Ogundipe had a brief session with staff members of the Media outfit.

While commending their dexterous approach to work as attested to by the C.E.O., Otunba Seni Adetu, Prof. Ogundipe underscored the indispensability of institutional loyalty in any corporate or formal endeavour.

While calling for attitudinal reorientation especially among employees in both the public and private sector, Prof. Ogundipe warned against what he called the culture of backbiting within the work place describing it as inimical to productivity, job progression and career fulfilment.

The P3P Strategy of the Prof. Oluwatoyin Ogundipe led management in UNILAG means “Pick a Project, Pick a Programme, Pick a Person” Public-Private Partnership model through which Professor Ogundipe has continued to attract support for academics, research and infrastructural needs of the University.

The 3-by-3 programme launched by Otunba Seni Adetu fits into “the Pick a Person” aspect of the P3P Strategy which Otunba Adetu upscaled by choosing to employ nine (9) UNILAG Mass Communication graduates over the next three (3) academic sessions.