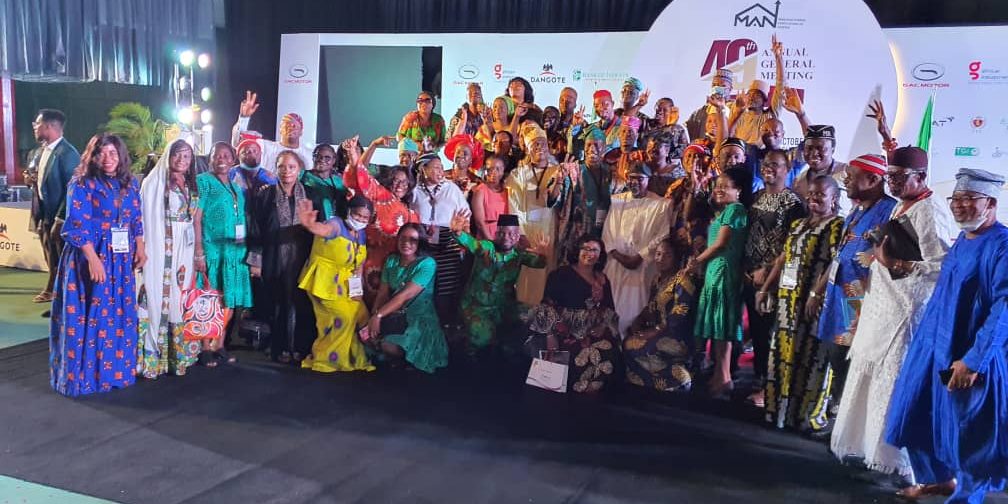 Two final year students of the Creative Arts Department, Faculty of Arts, University of Lagos, stunned the audience at the 50th Anniversary of the Manufacturers Association of Nigeria (MAN).

The duo of Sharon Ama and Tolulope Afolabi who major in Graphics Designing, won the first and second positions in a contest to design the next brand logo for the Manufacturers Association of Nigeria (MAN).

Sharon Ama and Tolulope Afolabi’s feats were celebrated at the grand finale of the 50th Anniversary and 49th Annual General Meeting of the Manufacturers Association of Nigeria (MAN) which held on the Wednesday, October 27th, 2021 at the International Conference Centre in Abuja.

Sharon Ama who dazzled the crème de la crème that gathered for the event with her presentation on the origination of the new brand logo, smiled home with the star prize of N200,000 (two hundred thousand naira) while her design is to henceforth, grace every output of the Manufacturers Association of Nigeria (MAN) as brand logo.

The contest recorded over 100 entries from students across six different universities and polytechnics in Nigeria.

Meanwhile, the Vice-Chancellor, University of Lagos, Professor Oluwatoyin Ogundipe FAS on behalf of the staff and management, has congratulated the two winners, Sharon Ama and Tolulope Afolabi on their feats.

Prof. Ogundipe who met the UNILAG delegation led by Dr. Olusola Ogunfuwa (their Graphic Design lecturer) who supervised the students’ entries and presentations for the MAN new brand logo competition, at the Nnamdi Azikiwe International Airport in Abuja on their way back to Lagos, described the performance of the two students at such national competition, as a further attestation to the rich creativity, abundance of talents and competitive spirit which the University of Lagos is keen on promoting especially among its students’ population.

While assuring the duo of Sharon Ama and Tolulope Afolabi of the goodwill of UNILAG management, Prof. Ogundipe described their success as a challenge to every student to reach inward, identify and unravel their ingenuity as a path to socio-economic emancipation.