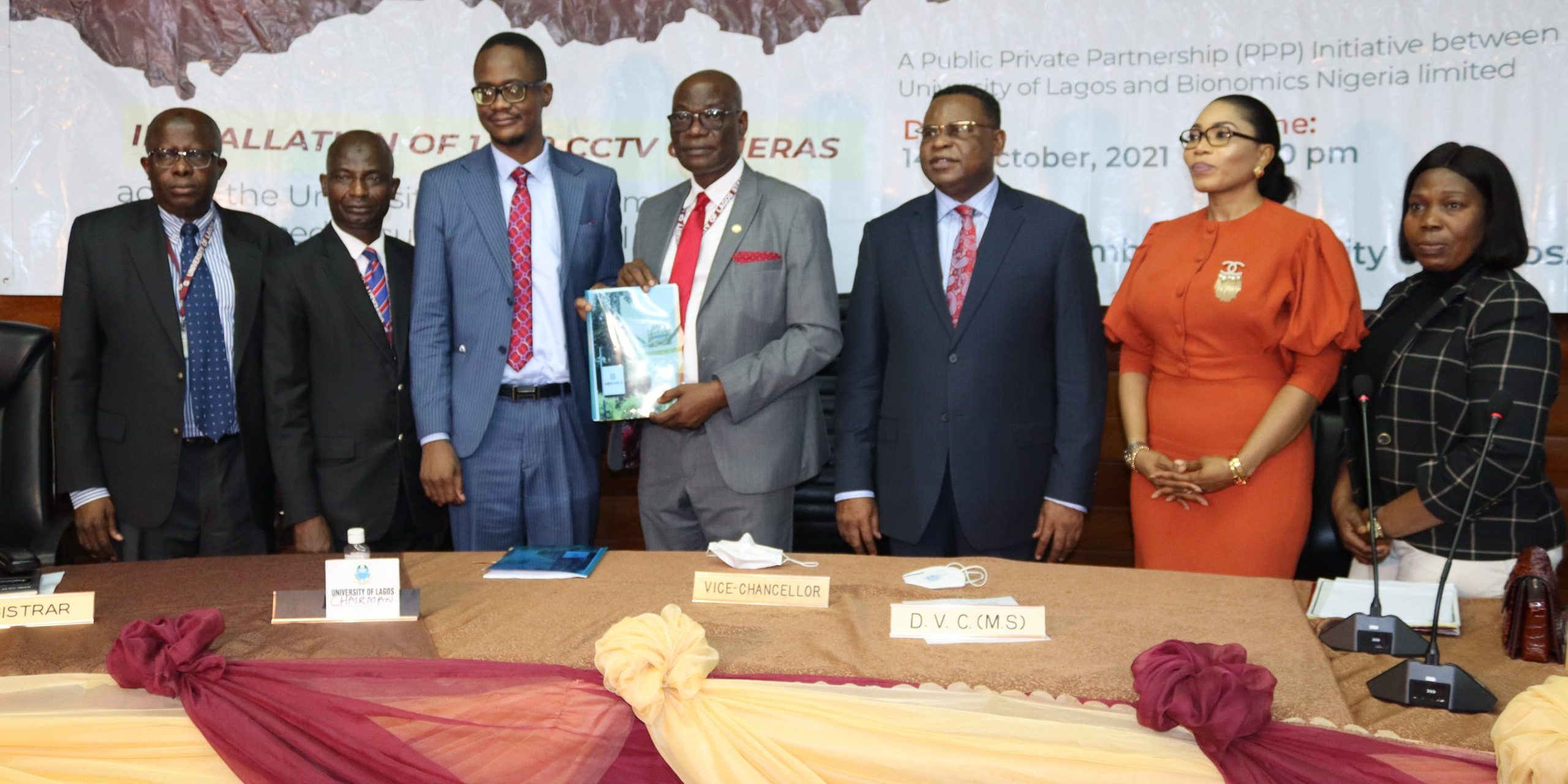 The University of Lagos on Thursday, October 14, 2021, entered into a Public-Private Partnership (PPP) with a private technology company, Bionomics Nigeria Limited to improve security architecture on campus.

The PPP would, among other things, facilitate the installation of a total of 1000 (One thousand) Close Circuit TV (CCTV) cameras across the university’s three campuses.

Speaking at a brief ceremony which held at the UNILAG Senate Chamber to mark the signing of the Memorandum of Understanding between the University of Lagos and Bionomics Nigeria Limited, the Vice-Chancellor, Professor Oluwatoyin Ogundipe FAS said the project is a result of collaborative efforts of his office all aimed at ensuring all-round development of UNILAG.

As part of landmarks so far achieved by his office, Prof. Ogundipe noted that the new Marine Police Station situated at the UNILAG lagoon front which was put in place with a TETFund zonal intervention fund, to replace the one built since 1992, would soon be commissioned and handed over to the police.

He noted that the new partnership with Bionomics Nigeria Limited will consolidate the already existing security architecture on the institution’s three campuses.

In his remarks, the Managing Director of Bionomics Nigeria Limited, Mr. Ugochukwu Onyedika said the partnership with the University of Lagos is part of the company’s strategic moves to use technology to tackle security among other myriads of challenges in the country.

While lauding the management of UNILAG for the openness to developmental partnerships as well as the quality of expertise which came to bear during negotiations, Mr. Onyedika, on behalf of Bionomics Nigeria Limited, said the project will drive a new phase of security which would guarantee the safety of everyone on campus and attract further developments.

Deputy Vice-Chancellor, Management Services; Professor Lucian Obinna Chukwu gave a breakdown of the new partnership with Bionomics Nigeria Limited, he said 700 out of the 1000 new CCTV to be installed, will be on the Akoka campus, while the remaining 300 goes to the Radiology and the College of Medicine campuses.

Prof. Chukwu said the project also comes with an ultramodern surveillance building which is to be built by Bionomics Nigeria Limited and delivered for use by December 2021.

Highpoint of the brief ceremony was the formal signing of the Memorandum of Understanding (MOU) by both the Vice-Chancellor, University of Lagos, University of Lagos; Professor Oluwatoyin Ogundipe (FAS) and the Managing Director, Bionomics Nigeria Limited, Mr. Ugochukwu Onyedika while copies of the MOU were formally exchanged to mark the kick-off of the agreement which will birth a security surveillance building and the installation of 1000 CCTV cameras on the three UNILAG campuses with a view to enhancing security and digital adverts.