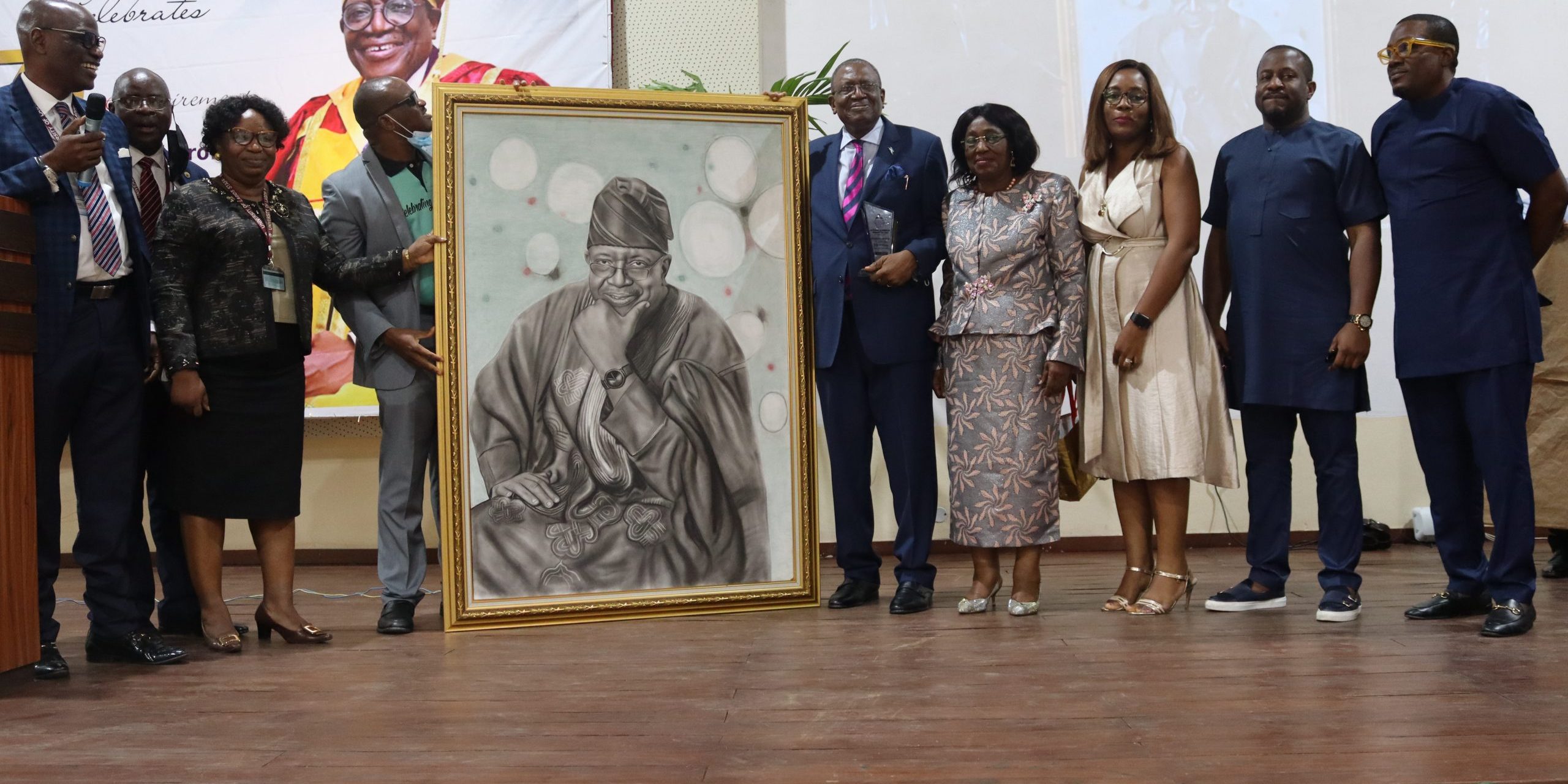 It was a harvest of encomiums, testimonies and tributes for foremost Chemist, Environmental Expert and former Deputy Vice-Chancellor (Academics & Research), University of Lagos, Distinguished Professor Babajide Ibitayo Alo, FAS, as he celebrated his 70th Birthday amidst pomp and pageantry.

The event organised by the Department of Chemistry, Faculty of Science, which held at Nurudeen Alao (DLI) Auditorium, on Tuesday, October 5, 2021, was also to mark his retirement from active service to the university.

The Vice-Chancellor, Prof. Oluwatoyin Ogundipe, FAS, in his remarks, extolled the virtues of Prof. Babajide Alo, adjudging him a mentor who invested a lot in people and gave a lot to the University. He described him as a man who is relevant both locally and globally with an untainted record of service.

The highpoint of the symposium was the ‘exaugural’ lecture, titled: “Journeys into the Allures of Chemistry: Nostalgias of a Seeming Paradox” which saw Distinguished Professor Babajide Alo reminiscing on his journey through early life, his aspirations, struggles with research and achievements in his career as a Chemist which made him the first (1st) Distinguished Professor of Chemistry in Nigeria. He reeled out some of his national and international appointments and assignments; his research contributions especially in environmental management, pollution studies and policy development in sustainable development.

He raised concerns over the dearth of state-of-the-art equipment in Universities; buttressed the need to uphold the ethics of the academic profession and high standards for all academics; foster long-standing cordial relationship between students, lecturers and other stakeholders in the university system, and for the government to establish the National Research and Development Fund (NRDF) with strong funding mechanism. He also stressed the need for universities to be insulated from undue government bureaucracies.

The symposium also featured a keynote address by the Deputy Governor of Lagos State, Dr. Obafemi Hamzat who joined the array of dignitaries to celebrate Distinguished Prof. Alo as he bows out of active government service.  In his speech titled: “The Role and Perspective of Government in Resolving Current Issues on Global Environmental Challenges”, the Deputy Governor enumerated the current issues and the roles of government in tackling environmental challenges.

While acknowledging the manifestation of climate change as evident in the loss of biodiversity, water and air pollution, urban decay, deforestation and poor municipal management, Dr. Hamzat noted that in the last 10 to 14 years, Lagos State has taken active steps to combat climate change issues through policy frameworks and currently adopts global best practices to shape its response to climate change challenges.

He noted that among other things, Lagos signed up for the C40 Cities Climate Leadership Group’s deadline 2020 programme in 2018 and committed to the Paris Climate Change Agreement, which is aimed at substantially reducing global greenhouse gas emission in an effort to limit the global temperature increase in this century to 2 degrees Celsius above preindustrial levels, while pursuing the means to limit the increase to 1.5 degrees.

The occasion was graced by the Oniru of Iru Kingdom, His Royal Majesty, Oba Abdulwasiu Omogbolahan Lawal, who congratulated Distinguished Prof. Babajide Alo on his retirement. In his brief address, he urged the University to look into creating a low carbon emission zone on campus.

Vice-President of Nigeria, Prof. Yemi Osinbajo, in his goodwill message delivered by the Senior Special Assistant to the President on Industry, Trade and Investment, Dr. Jumoke Oduwole, extended his hearty congratulations to Prof. Alo on his birthday and retirement from active service. He commended the celebrant’s efforts in galvanising stakeholders on waste management and other environmental challenges which led to the promulgation of relevant regulations and guidelines for the Centre.

Other highlights of the colourful event included the public presentation of a publication titled, “Natural and Synthetic Substances in the Environment: A Compendium on Policy Assessment, Insights and Implications”. It was launched by former Chairman, Ecobank Plc., Chief John Odeyemi in honour of the celebrant.

The Head of the Department of Chemistry, Professor Olayinka Asekun, had earlier expressed delight that Distinguished Prof. Alo was retiring in excellent health and acknowledged his irreplaceable footprints both as an academic and administrator.

The event also featured presentation of prizes to winners of the third edition of the Distinguished Prof. Babajide Alo Organic Chemistry Competition. The winners were: