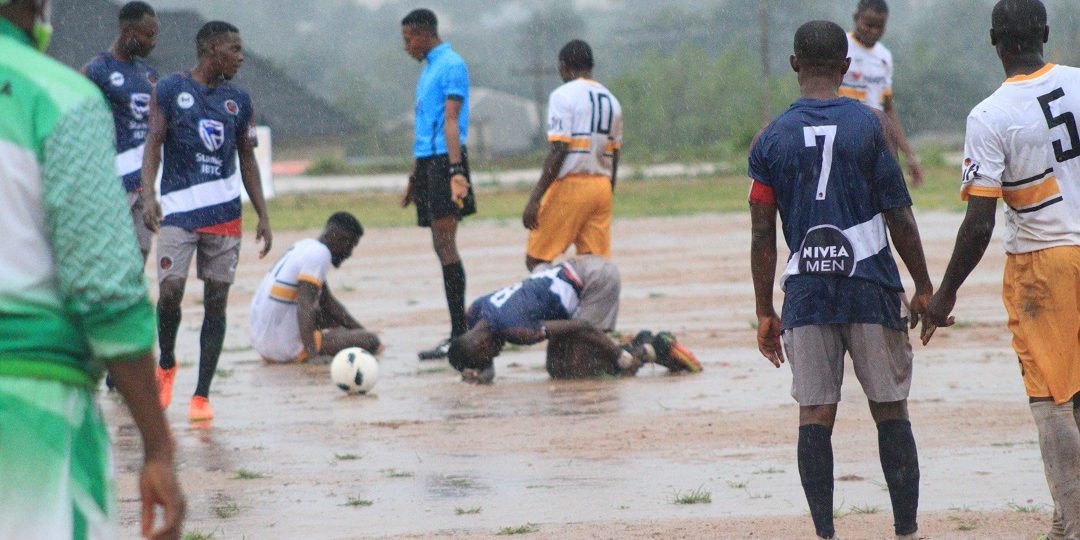 UNILAG Marines, the men’s football team of the University of Lagos, are out of the ongoing 2021 Higher Institution Football League (HiFL), no thanks to a highly controversial penalty call by the match referee at the 9th minute of the First Half of the 15 minutes extra time.

The keenly contested match, which was played at the Adekunle Ajasin University Sports complex commenced on Wednesday, September 1, under unfavourable weather conditions, way behind schedule, and eventually had to be postponed to the next day, Thursday, September 2, 2021.

The Match Commissioner, Coach Udoh sanctioned the match to get underway, despite the registration of concerns by the Technical Crew of the UNILAG Marines about the unfair weather and the water-logged football pitch on account of the heavy downpour.

Up against the elements, both teams found the game a nervy one. They both showed dexterity on and off the ball, and the UNILAG Marines proved more than a handful for their hosts during the encounter.

Both teams – and more so the UNILAG Marines – created good goal-scoring chances in the First Half, but could not do much with them because of the unfavourable conditions.  In the Second period, chances were few and far between till the end of the 90minutes of play.

The decision to postpone the game till the next day created another difficult situation for the match officials. While the hosts wanted it postponed to the next morning, the UNILAG Marines crew insisted that the match must be concluded on the night, because they had initially suggested the postponement prior to the commencement of the match, but their suggestion was ignored. Again, the Match Commissioner intervened and the teams agreed to resume the match at 8:00am the next day, Thursday, 2nd September.

It was a decision that will eventually come to favour the home side, Adekunle Ajasin University, Akungba (AAUA) Luminaries not by nature’s order, but through the excessive sentimental officiating of the Centre Referee throughout the duration of the extra periods.

The Centre Referee completely took the shine off the game by awarding a penalty to the hosts after there was a contest for the ball in the box on a wet ground that had the Adekunke Ajasin University Akungba player slip, without any contact from the UNILAG Marines player.  The situation created a melee and gave a winning advantage to the hosts, after the goal was scored via a penalty.

In his post-match reaction, Captain of the UNILAG Marines, Folarin Moses expressed his displeasure at the level of officiating, affirming that the entire team felt cheated out of qualification for the Semi-Final.

Assistant Manager of the UNILAG Marines, Coach Oluwo, shared the same position, asserting his belief that his boys would have gone ahead to win the game, but for the goo by the match officials.  “We will be back to fight another day”, he said.

In other results across other centres saw UNIBEN Royals pipped UNN with a lone goal in Benin but was not enough to put them through, as they lost 2-1 on aggregate.  In the Northern derby, FUTMINNA Transformers got the better of the boys from UNILORIN 4-3 via penalties after score stood at 0-0 after extra time. UNIMAID Desert Warriors defeated UAM Tilers 3-0 to progress 3-1 on aggregate.