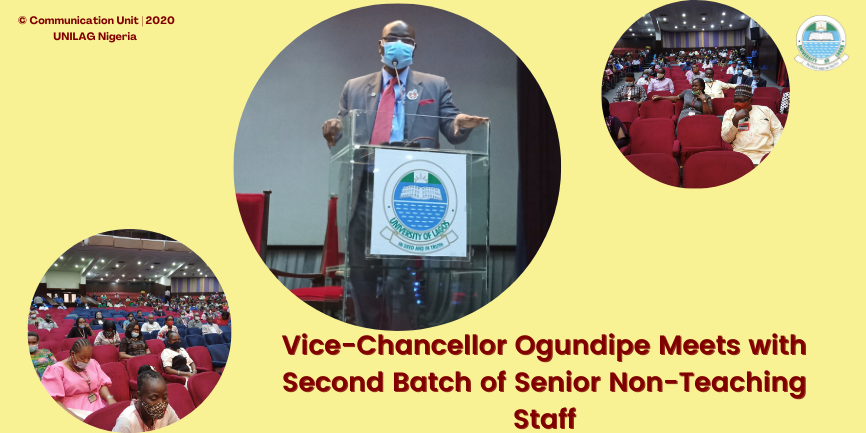 In continuation of his fence-mending and confidence-building efforts, the Vice-Chancellor, Professor Oluwatoyin Ogundipe, FAS, has again met with a second batch of the senior Non-Teaching staff of the university.

Like he had done with the first set of senior officers, the Vice-Chancellor encouraged everyone to put behind them what had been a very challenging period for the university.

He reiterated his accountability to every member of staff, his commitment to their welfare and his determination to see to ensure that, whatever could be done, by the rules,  to facilitate the career advancement of members of staff would be done. To that end, he pledged the University’s commitment to sponsor all Drivers to the training required for their promotion.

Professor Ogundipe rededicated himself to the mission of attracting infrastructural development to UNILAG, while not relenting on his efforts to win more grants for research purposes. UNILAG has won over N4billion in research grants since the beginning of his five-year tenure.

To address the issue of staff accommodation, he informed the cheering audience of Management’s plan to build 200 units of flat on campus and encouraged members of staff to prayerfully support the cause.

A question-and-answer session of further comments and clarifications from the members of staff rounded off what was generally accepted as a “family meeting”.

The University of Lagos is in for glorious times.