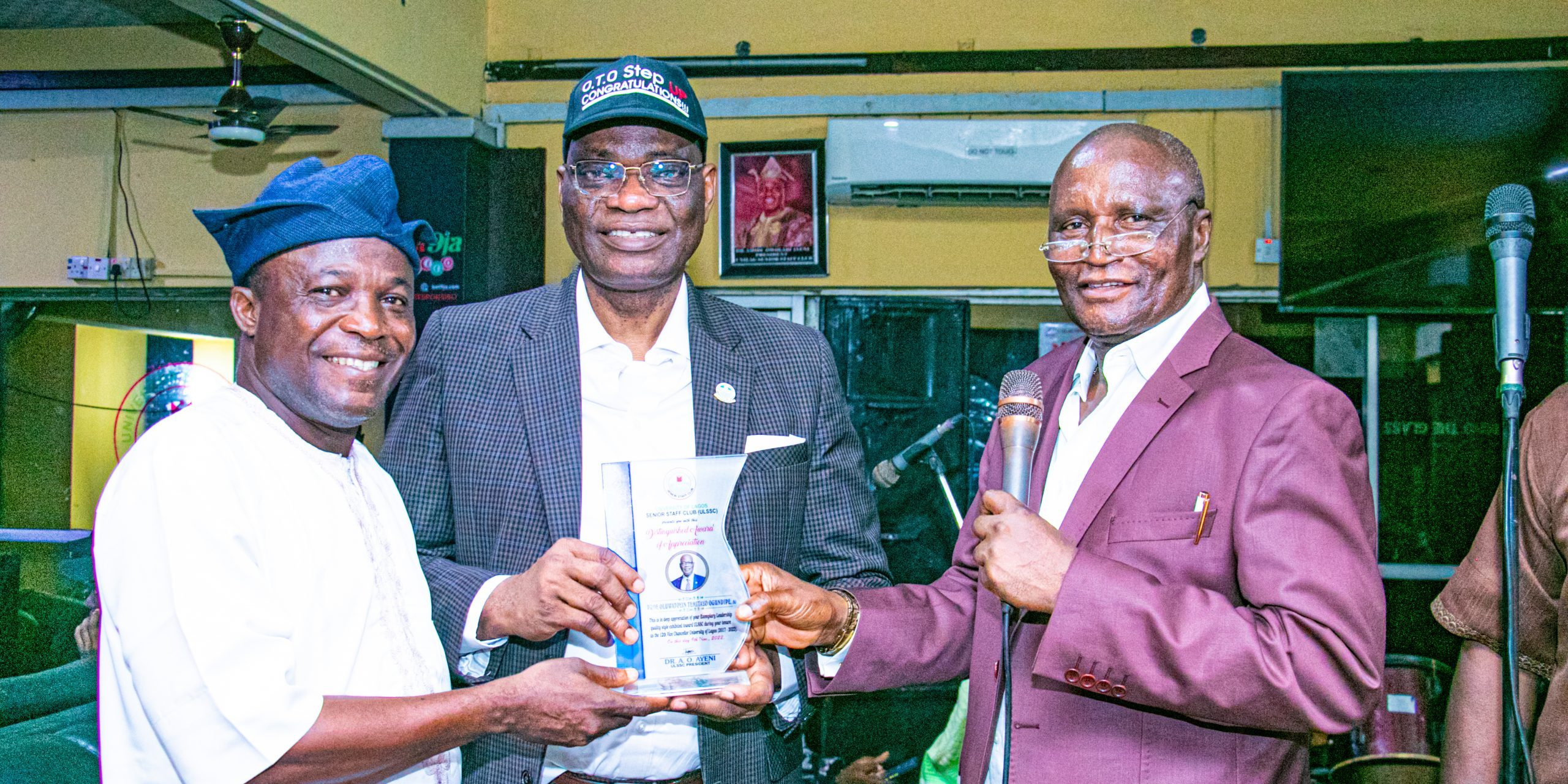 Members of the Senior Staff Club, University of Lagos, on Wednesday, November 9, 2022, rolled out the drums to celebrate Professor Oluwatoyin Ogundipe, FAS, as he wraps up his term of office as the 12th Vice-Chancellor of the university.

The reception which held at the UNILAG Senior Staff Club was an avenue for the senior staff members of the University to celebrate Prof. Ogundipe for what they unanimously adjudged a purpose-driven leadership which heralded massive progress in UNILAG over the last 5 years despite various challenges.

Speaking on behalf of members, President, UNILAG Senior Staff Club, Dr Amidu Ayeni eulogized Professor Oluwatoyin Ogundipe, FAS, describing his tenure as one which has changed the fortunes of UNILAG for the best.

Dr Ayeni likened Prof Ogundipe’s leadership to an eagle’s uniqueness and ability to fly above the storm which resulted into the stability and unprecedented successes which UNILAG has recorded even in the midst of crisis.

In his remarks, Professor Oluwaotin Ogundipe appreciated the Senior Staff Club members for the honour and more importantly, the mutual support and cooperation accorded him over the years.

Prof. Ogundipe recalled his fond memories at the Senior Staff Club being venue of his Bachelor’s eve exactly 30 years ago. He described the place as a melting pot for all senior staff irrespective of status, and commended successive executives of the club for sustaining and promoting the ideals of the club. The outgoing Vice-Chancellor assured the Club of his commitment towards the growth of the senior staff convergence even after office.

Highlight of the colourful ceremony which was graced by the wife of the Vice-Chancellor, Mrs. Oluwaseun Ogundipe and other principal officers of the University included presentation of a plaque to Prof. Ogundipe in recognition of his exemplary and impactful leadership.

While presenting the plaque, former Deputy Vice-Chancellor, Management Services, Professor Duro Oni commended Prof. Ogundipe’s resoluteness and deep sense of purpose, one which he identified as the cornerstone of his achievements.

Prof Oni who was President of the Senior Staff Club between 1986 and 1988 was also recognized as the longest-serving staff of UNILAG with a record of service spanning Forty six (46) years.

The reception provided an avenue for Senior Staff members and management to relax, unwind, cheer and merry all in the spirit of celebrating Professor Oluwatoyin Ogundipe, FAS, who is also a one-time Secretary of the UNILAG Senior Staff Club.